At Shaheen Bagh, India rediscovers itself 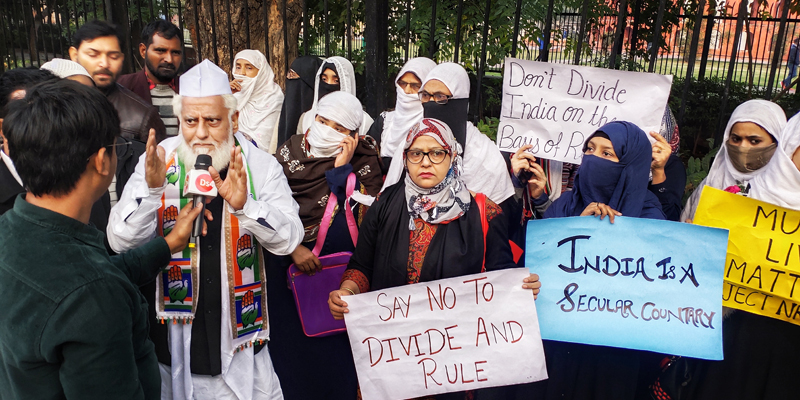 On the night of January 29, 2020, a four-month-old whose parents were part of the protests at Shaheen Bagh died of exposure to the cold. The mother, Nazia (24), said she would continue protesting against the new citizenship law that has sparked outrage across India. “I would bring him to the protest to fight for the future,” she was quoted as saying. “Protestors gave him a Tricolour bandana; they loved him.”

If resistance has a form, Shaheen Bagh is it.

The once unremarkable, barely-known neighbourhood in New Delhi is now the epicentre of protests erupting throughout India against the Citizenship Amendment Act (CAA). Led by women, many of them carrying young children, hundreds are braving the severe cold and pollution to oppose the law that eventually seeks to create a stratified, religion-based citizenship.

The protestors want the government led by the Hindu supremacist Bharatiya Janata Party (BJP), which hasn’t shied from running roughshod over basic rights and key institutions, to know it is still accountable. Inspired by the demonstrations at Shaheen Bagh, Jawaharlal Nehru University and Jamia Millia Islamia university in Aligarh, chants of “Hindu-Muslim ek hai, Modi-Shah fake hai!” (“Hindu-Muslim are one, Prime Minister Narendra Modi and Home Minister Amit Shah are fake!”) and “Inquilab zindabad” (“Long live the revolution”) are echoing through the country. Indians across the social spectrum have gathered in public areas to read out the preamble to the Constitution, which many believe the government is undermining. Thousands have formed human chains and held aloft likenesses of Dr BR Ambedkar, the chief architect of the Constitution. At least nine chief ministers – such as those of Kerala, Punjab, West Bengal and Rajasthan – have said they will not allow the CAA to be implemented in their states. The seas of protestors compare the detention camps for undocumented immigrants to concentration camps and the BJP to the Nazis.

The government has responded to the peaceful protests with a mixture of brute force and the application of archaic laws – carried out by the police and organisations affiliated to the BJP. Students have been herded into jail, many have died of unprovoked firing and the use of tear gas and water cannon – especially in Uttar Pradesh, India’s most populous state led by the BJP’s venom-spewing Yogi Adityanath. A regulation outlawing the assembly of more than four people has been used and there have been internet blackouts in several states. 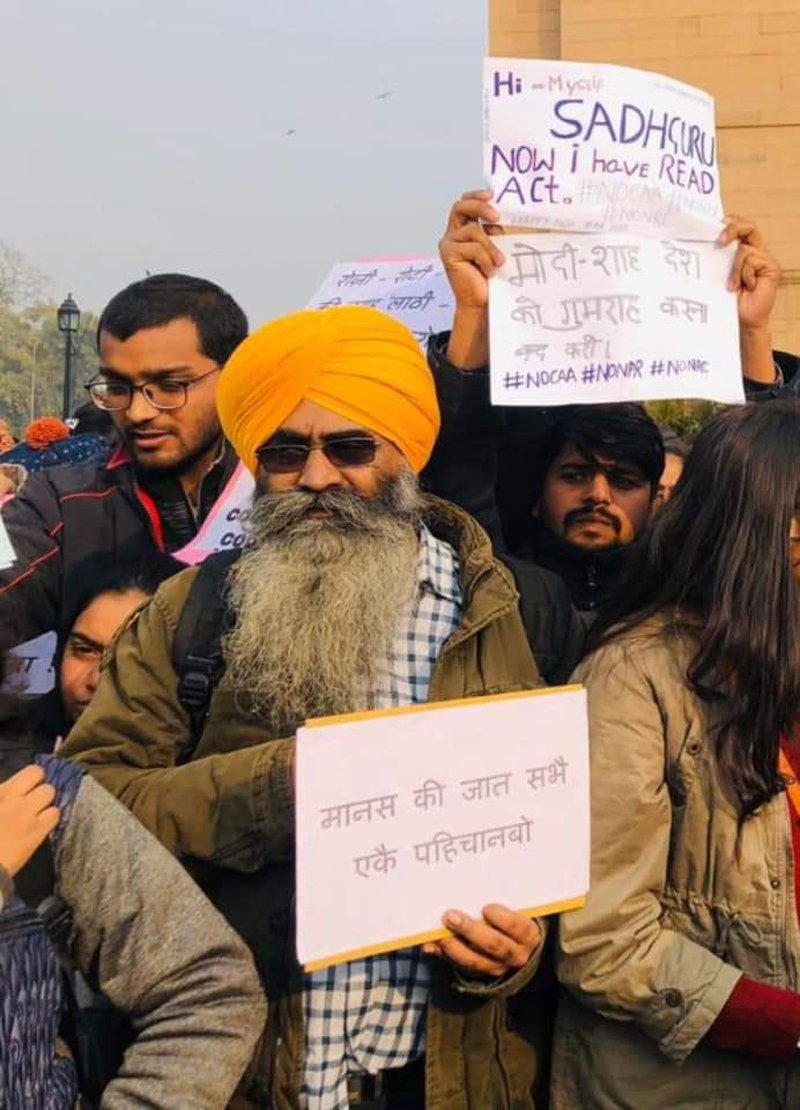 Why CAA is a problem
The CAA is a legal instrument that offers easy citizenship to migrants of all religions from neighbouring countries while pointedly refusing it to Muslims. It is reminiscent of Myanmar’s Citizenship Law that kept out the Muslim Rohingyas and laid the foundation for their genocide. The CAA cannot be viewed in isolation. Shah, Modi’s most trusted lieutenant, is on record saying it will be followed by the National Register of Citizens (NRC) that aims to identify illegal immigrants, detain them in camps and deport them. To qualify as citizens, the NRC requires a set of documents that millions don’t have. Globally accepted documents, such as passports, don’t count.

However, adherents of all religions – other than Muslims – who don’t have the required documents can then gain citizenship through the CAA route.

The erosion began six years ago
There has been a steady attack of democratic freedoms since the start of Modi’s first term roughly six years ago – from the ban on consumption of beef to the prolific application of sedition charges on journalists, critics and even parents of children who staged an anti-CAA play. The world’s largest democracy is perhaps at its most fragile – its social, political and economic divisions fully exposed.

You could describe the situation as a clash of two different visions of India – one a Hindu state in which Muslims have no place and other minorities must accept second-class status, and of the secular state envisioned in the Constitution and by the founders of the nation.

A lifelong member of the Rashtriya Swayamsevak Sangh (RSS), which is dedicated to creating the Hindu state, Modi is leading the Hindutva charge.

This has been the dominant theme after the BJP’s electoral windfall in 2014 aided by a weak, listless opposition. Modi has sought to curb even federalism by appointing governors who hinder the functioning of states ruled by other parties. A few months ago, his government withdrew the special status guaranteed to the state of Jammu and Kashmir at the time of its accession to the Indian union and imposed a brutal lockdown that has all but destroyed the state’s economy.

All this has proven to be a little too much even for BJP allies. Some, like the Akali Dal, have demanded that Muslims be included in the CAA while others like the Janata Dal (United) have suffered a division among the leadership. The Shiv Sena, with which the BJP had an alliance for decades in Maharashtra, broke away after an election they won when it was denied the chief ministership for part of the government’s tenure. The Sena then struck a partnership with the Congress and Nationalist Congress Party to form the government – the latest in a series of state-level setbacks for Modi and the BJP. Now, the Maharashtra government too has said it won’t implement the NRC.

Beyond CAA
The CAA isn’t a threat to Muslims alone. It affects all Indians by trying to redefine what it means to be an Indian.

This is a pivotal moment for India because the protests are steadily going beyond the CAA to include the erosion of rights, the worrying state of the economy and social justice for the weaker castes that have been discriminated against for centuries.

The BJP’s electoral success must be seen in conjunction with a similar trend across the world. There is a rise of radical nationalism and a tapping of societal divides. Donald Trump is but one example of that.

You can blame this, at least in part, to the lopsided economic growth over the past few decades. When Manmohan Singh and PV Narasimha Rao, then finance minister and prime minister respectively, rammed through liberalisation in the early ’90s, it turned India into one of the fastest growing nations on Earth. Over the years, it pulled hundreds and millions out of poverty. However, the economic divide is now a vast chasm – a mere 1% of Indians own more than half of its wealth.

The resentment over this was an opportunity for Modi to position himself as a messiah and create an enemy on which to blame the mess. Millions have lined up to guzzle this Kool Aid.

Matters aren’t helped by the lack of leadership in the opposition. The only other truly pan-India party, the Congress, seems to be sleepwalking through the political turmoil with its leader Rahul Gandhi – scion of the Nehru-Gandhi political dynasty – only now displaying the vigour you’d expect from a man hoping to lead the country.

The intentions of the BJP and Modi are clear. So are their costs: a societal implosion and economic hara-kiri. The economy is the worst it’s been in a decade. Jobs are scarce – critical to a nation that is adding millions of employment seekers to the market every year. Government data, even in the Union Budget tabled in Parliament, has been repeatedly called out as unreliable and the economic outlook is cause for worry. The automobile industry, for example, has shed hundreds of thousands of jobs, the real estate industry is languishing and consumption is down. Modi and Finance Minister Nirmala Sitharaman have produced no roadmap of a way out or even convincing answers about how we got here. Instead, they harp on Pakistan and Hindutva and claim that the Hindu majority is in some sort of foggy, undefined danger.

The world is watching. Resolutions have been passed by the European Union and in other legislatures abroad against the CAA, but those are unlikely to sway Modi.

Most Indians, meanwhile, seem to have a resolution of their own – one that keeps a secular, progressive vision of the country front and centre, understanding instinctively that the future of their democracy is at stake.