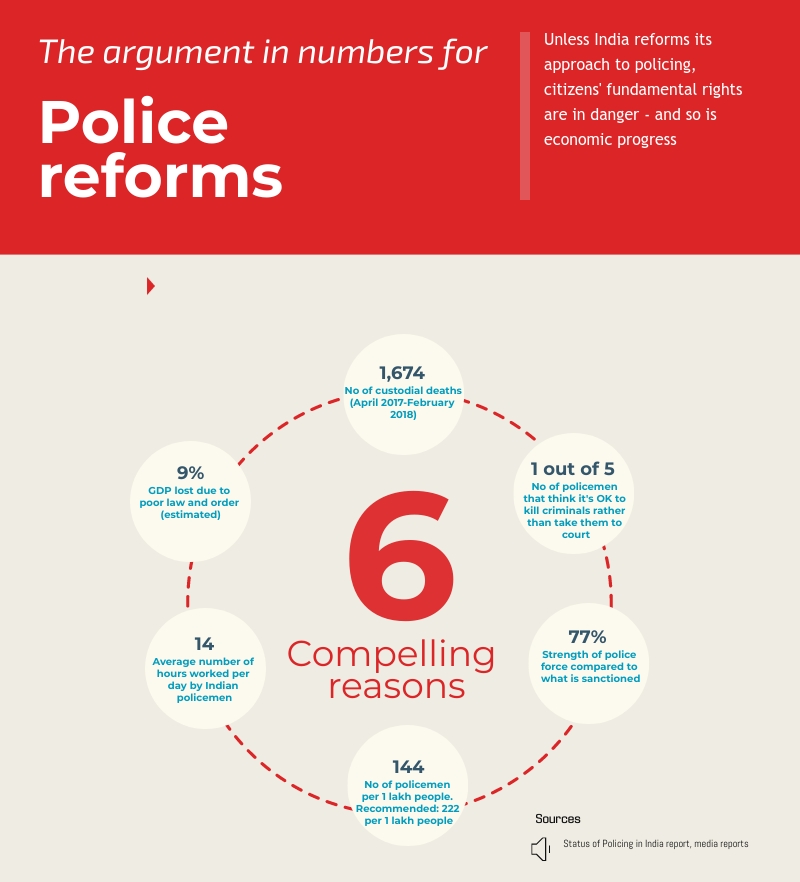 The police’s conduct after the death of the Hathras gangrape victim, during the protests against the Citizenship Amendment Act and the indiscriminate use of Draconian laws underscores the critical need for police reforms. Welcome to our latest episode.

The recent gangrape and murder of a Dalit girl in Uttar Pradesh’s Hathras district had more than one set of culprits. The 20-year-old was raped, maimed and left for the dead by four upper-caste men. But she was the victim of an equally heinous crime after she died too. As soon as she passed away in a Delhi hospital, the Uttar Pradesh police whisked away her body. They took it to her hometown and tried to force her family to cremate it immediately.

They resisted, some even hurling themselves on the ambulance carrying the body. The Uttar Pradesh police then lectured the family about tradition, presumably referring to caste, and sought to place part of the blame on it. When the family still didn’t agree to cremate the body, the police locked them in their own houses, refused to allow the media close and cremated the body themselves.

Let’s look at another case. On October 7, a 31-year-old convict was found hanging inside his cell in Nashik. Asghar Mansoori had been in prison for a little over 14 years for murder and was allegedly being harassed by jail staff. Anticipating that they would cover up the cause of his death, he wrapped a detailed suicide note in a polythene bag and swallowed it. The note was found in his stomach during the post mortem.

These are just two examples of the degeneration of the police force across India. They bring into focus yet again the urgent need for police reforms.

While the police is a part of the state, necessary for maintaining the rule of law, the truth is that it is all too often a weapon of the state. Across India, we’ve had several instances of the government using the police to suppress citizens – from tribals fighting forceful acquisition of their lands to unarmed citizens protesting peacefully.

Especially since 2014, we’ve seen legislation like the dreaded UAPA, sedition laws and the National Security Act used against poets, student leaders, journalists, human rights activists – essentially anyone who dares to oppose the policies of the government.

Uttar Pradesh, ruled by Hindu supremacist chief minister Yogi Adityanath of the BJP, has boasted about enabling the police to kill alleged criminals in extra-judicial encounters. Among those killed are a large number of Muslims and lower castes.

Even laws to be applied only during epidemics are being used against citizens. For instance, when Congress leader Rahul Gandhi attempted to meet the Hathras victim’s family, the Adityanath government used the COVID-19 pandemic to impose Section 144 to seal the locality, thus prohibiting the assembly of four or more people.

Let’s not forget the use of the National Security Act and terror laws against those protesting peacefully against the Citizenship Amendment Act. In many instances, victims of riots have been branded as perpetrators and jailed.

The problem continues up the chain to the judicial system. You’d expect the courts to come to the rescue of the common man but instead we are seeing inordinate delays as they repeatedly postpone the hearing of critical cases.

In this backdrop, it’s hardly surprising that the number of deaths in police custody is staggeringly high. Between April 2017 and February 2018, India had 1,674 custodial deaths – that’s five a day, according to Home Ministry statistics. The top offender – you guessed it, Uttar Pradesh with 374.

In 2019, two organisations, Common Cause and the Centre for the Study of Developing Societies, released the Status of Policing in India Report. It showed marked biases within the police against Muslims and similar prejudices against tribals, lower castes and members of the LGBT community. It’s evident that large parts of the police force have never been sensitised to human rights.

So, the question arises – what are the remedies against police excesses in India? There are many – for instance, compensation. However, such cases rarely get far – not only because of the fear of harm but because the burden of proof is too high in most instances. This is compounded by deliberately botched chargesheets that fail the test of law.

Citizens can file criminal complaints against officers but independent investigations are rare. Bizarrely, in some cases, officers have been asked to investigate complaints against themselves. Often, policemen refuse to register complaints against their colleagues and the less said about Section 197 of the Criminal Procedure Code the better. This section requires sanction from the government when a public servant is accused of an offence. Such sanctions are very hard to come by.

The problems with the police came to a head in 2006 when the Supreme Court ordered that Police Complaints Authorities be established at the state and district levels. In the absence of an effective framework for action against police misconduct, the court said, the recommendations of these authorities for action against errant police officers would be binding.

However, the order was not implemented. In 2013, the Justice Verma Committee, constituted after the Nirbhaya gangrape in Delhi, also noted the non-compliance and urged states to act.

Nothing happened even then. In August 2016, a NITI Aayog document on police reforms confirmed again that little has been done on this front. Only 17 states had passed legislations to amend their police statutes. In almost all states where the Police Complaints Authorities had been formed, their recommendations were not binding. This is a direct contravention of the court order.

A national understanding and debate over how to regulate the police’s functioning is important especially because of cases like Hathras and the custodial deaths of a father and son in Tamil Nadu’s Sathankulam town after they were taken in by the police for allegedly violating lockdown orders and tortured.

In some cases of excess, there have been repercussions like suspensions but these are minor slaps on the wrist and few believe they will prevent a repeat of such incidents.

Too much power has been given to the police without the necessary oversight to ensure against its misuse.

No wonder the Status of Policing report found that three-quarters of policemen thought it was fine to use violence against criminals and four-fifths thought it was OK to use violence to extract confessions. This is so well known that even when a confession is not made under duress, lawyers advise clients to allege it in order to get bail or escape punishment. This could be one of the reasons one out of five policemen thought killing dangerous criminals was better than relying on courts.

India’s police system badly needs reform. It’s an issue that has been hanging fire for far too long.

The Supreme Court’s directives to the government could be a starting point. They include:

We must also recognise that the root of the problem is deep. Policemen are part of society – they reflect its prejudices and character. They are often unable to separate their personal biases when it comes to performing their duties. This is dangerous because keeping out bias is a key part of their job. Unless we work on eradicating prejudices against minorities and other vulnerable groups, and end the apathy towards issues if they don’t directly concern us, we will never be rid of police misconduct.

Policemen need better training and sensitisation, and the fundamental fact that their duty is to uphold the Constitution and rule of law needs to be repeated until it becomes second nature.

Shortage of personnel is the single biggest problem facing the police. According to the Status of Policing in India report, the force is at only 77% of its sanctioned strength. The situation in Uttar Pradesh is the worst at roughly 50% of sanctioned strength.

In fact, the number of policemen in India as a proportion of the population is one of the lowest in the world. According to United Nations guidelines, there should be 222 policemen per one lakh people, but in India there are only 144 policemen for every one lakh citizens.

This is why they work impossibly long days, averaging 14 hours a day.

Of course, none of this is an excuse for the non-registration of complaints, extra-judicial killings or the targeting of minorities. That is why many judicial experts have said that unless the reforms asked for by the Supreme Court are enacted, the democratic rights of citizens are in peril.

Already, the trust deficit seems too large to bridge.

But act we must because police reforms are directly linked to the country’s progress. You cannot have an advancing, prosperous country without the rule of law and a functional criminal justice system. In the absence of these fundamentals, investment and commerce would recede and impact employment. One estimate says 9% of the GDP is lost every year to poor law and order.

Unless the police force, a pillar of the criminal justice system, is reset and reformed, it’s tough to imagine other components of the system working either.

The roots of Gandhi's satyagraha philosophy lay in the farmer agitations he led. Today, farmers are replicating the protests against an equally uncaring and arrogant government, writes @TusharG in another moving column for @allindianscount.
http://www.allindiansmatter.in/farmers-the-satyagrahis-amongst-us/ #FarmerProtest