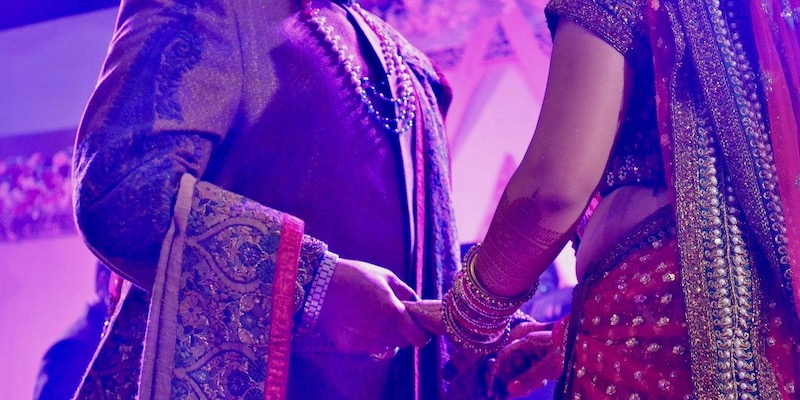 The Bharatiya Janata Party government in Madhya Pradesh is introducing a ‘love jihad’ law, ostensibly to discourage conversions at the time of marriages based on inducements and false promises. The fear, however, is that in practice it’s likely to be used to deter all inter-faith marriages that involve Hindu women – even if they are based on free choice. Inter-faith marriages, the right to choose your partner and the right to follow a religion of your choice are enshrined in law. But, for an increasingly aggressive Hindutva, that is merely something to be brushed aside.

Madhya Pradesh’s ‘love jihad law will carry a punishment of five years’ rigorous imprisonment for violators. The charge will be cognisable and non-bailable. The law will also make it mandatory to notify the district collector a month in advance before formalising an inter-faith marriage. The law will even have a provision to declare null and void marriages that have been deemed to be carried out by force, fraudulently or by tempting someone for religious conversion. It’s unclear who will deem them so or what the criteria for that are.

This is part of an ongoing campaign that opposes the marriage of Hindu women to Muslim men. The Hindutva brigade, including several senior leaders of the BJP, allege a Muslim conspiracy to convert Hindus via marriage and thus reduce their numbers in India. ‘Love jihad’ is the term used to describe it.

While various saffron outfits continue to propound this imaginary conspiracy, the Union Government led by the BJP has chosen the official line that no case of ‘love jihad’ has been reported by any central agency. In fact, Minister of State for Home G Kishan Reddy said the term ‘love jihad’ was not defined under any extant law and that Article 25 of the Constitution provides for the freedom to profess, practice and propagate religion.

Incidentally, the right to marry a person of your choice is guaranteed under Article 21 of the Constitution.

Hindutva outfits, however, are using their favourite theory to portray Muslim men as jihadis who manipulate and brainwash Hindu girls in the name of love to convert them.

Sure enough, other BJP governments have jumped onto the bandwagon.

Uttar Pradesh is considering a law similar to Madhya Pradesh’s. At a recent election rally in Jaunpur, Chief Minister Yogi Adityanath, referring to a remark by the Allahabad high court that conversion just for the purpose of marriage was unacceptable, issued a chilling warning. “Your Ram naam satya journey will begin if you don’t mend your ways,” he said. Following an outcry, he seemed to backtrack, saying he was referring to criminals and not those engaging in inter-faith marriage.

Karnataka Chief Minister BS Yedyurappa also said his government would take measures to end religious conversions in the name of love jihad. At a BJP executive meeting, he said: “Young girls of the state are being lured in the name of love and money and are being converted to other religions. After a thorough review, we will take a strong measure.”

The BJP-led Haryana government, too, is considering a “strict law to control love jihad”. The state’s Home Minister Anil Vij said that a committee would be constituted to draft the legislation and that he had met with senior bureaucrats to discuss the matter.

Himachal Pradesh has already passed such a law.

The wording of that law – passed last year – is significant, especially because it is being used as a reference point by other BJP-ruled states.

According to it, “no person shall convert or attempt to convert, either directly or otherwise, any other person from one religion to another by use of misrepresentation, force, undue influence, coercion, inducement or by any fraudulent means or by marriage; nor shall any person abet or conspire such conversion”.

It further says that any marriage done for the sole purpose of religious conversion may be declared null and void.

As per the Himachal Pradesh law, anyone who wishes to convert to another religion must give a written declaration to the district authorities at least a month in advance, specifying that they are doing so of their own volition. Even the priest who performs the conversion ceremony has to inform the authorities a month in advance. The district magistrate must then conduct an inquiry regarding the “intention, purpose and cause of proposed conversion”.

As if this open-ended, vague wording wasn’t enough, the burden of proof as to whether the conversion was not effected through force or fraud lies on the person converted or the person who has facilitated the conversion.

This flies in the face of basic legal sense.

Justice (Retd) Aditya Nath Mittal, chairperson of the Uttar Pradesh State Law Commission, was quoted as saying that if the state government sought to bring a “limited scope legislation” restricting marriages between a Hindu and a Muslim in the garb of curbing love jihad, it would not stand legal scrutiny.

That hasn’t stopped supporters of the proposed law from pressing on. Recently, Chairperson for the National Commission for Women Rekha Sharma tweeted that she had discussed the “rise in love jihad cases” with Maharashtra Governor Bhagat Singh Koshyari. However, a Right to Information query revealed that the commission does not maintain any data on such cases.

The proposals by Madhya Pradesh, Uttar Pradesh and Haryana should be recognised for what they are in their essence – communalism. What these governments are attempting is to normalise the demonisation of inter-faith marriages and, by extension, Muslim men.
The justification is common and predictable: the honour of Hindu women is under threat and the state can’t simply look on and do nothing.
It doesn’t take a genius to spot the flaw in the argument: there is no legal sanction to intervention in marriages involving consenting adults. It’s utterly unconstitutional.

India has laws against coercion already as well as laws governing weddings. The Special Marriage Act enables marriages between couples from different faiths.

The state laws being considered go against existing legislation and the fear of them being the first step towards disallowing inter-faith marriages altogether is real.

Thank you all for listening. Please visit www.allindiansmatter.in for more columns, videos and audio podcasts. You can follow me on Twitter at @AshrafEngineer and @AllIndiansCount. Search for the All Indians Matter page on Facebook. On Instagram, the handle is @AllIndiansMatter. Catch you again soon.