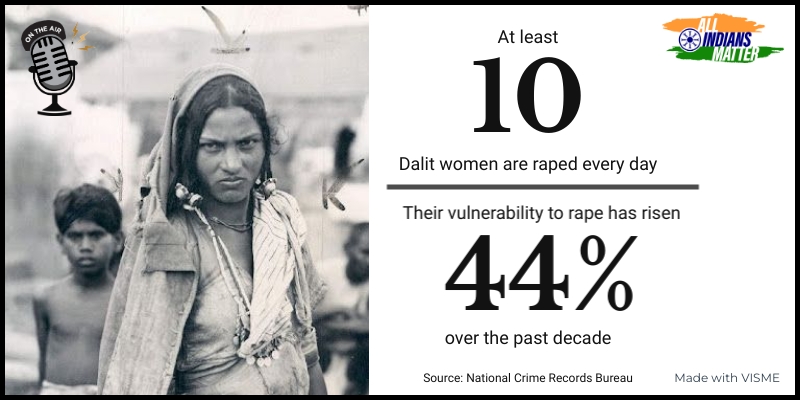 Two Dalit sisters, minors, aged 15 and 17, were raped, strangled and then hung from a tree in Uttar Pradesh’s Lakhimpur Kheri district a few days ago. Police said the sisters had been lured into a field and then assaulted. Six men were arrested for the crime.

In 2020, a 19-year-old Dalit girl was gangraped and murdered by high-caste men in Hathras, also a district of Uttar Pradesh.

In 2014, two Dalit girls, who were cousins and also minors, were kidnapped, gangraped and hung from a tree in Badaun district of Uttar Pradesh, triggering off mass protests and inviting concern even from the United Nations.

These are only some examples of the widespread sexual violence faced by Dalit women, widely thought to be the least empowered and most vulnerable social group in Asia, if not the world. Dalits sit at the bottom of the caste hierarchy and Dalit women come last in it. They make up 16% of India’s female population and face the highest risk of gender- and caste-based violence.

Let this sink in: at least 10 Dalit women are raped every single day in India and their vulnerability to rape has risen 44% over the past decade, according to the National Crime Records Bureau.

This frequency of violence faced by them is founded on a bedrock of economic oppression and is socially sanctioned through the caste system, the roots of which run deep despite all our laws and all the lip service paid to it. Upper caste men unleash sexual violence on Dalit women to underscore their own social power and to remind the women, and by extension the entire Dalit community, of their place in the caste hierarchy.

There’s more. A Human Rights Watch report said that Dalit women are more vulnerable to sexual assault because they make up a majority of India’s landless labourers and scavengers, and a significant percentage of them are forced into prostitution. Because they are landless and must seek employment from those who do own land, Dalit women come into contact with landlords and other powerful entities who can easily exploit them.

According to census data, 71% of Dalits are landless labourers working on others’ land. According to the Agriculture Census, in rural areas, 58.4% of Dalit households own no land. It’s worse in states like Haryana, Punjab and Bihar, where 85% own no land.

I’ve already mentioned that Dalit women are more vulnerable to rape, but let’s take a closer look at the numbers. The data shows a 45% rise in reported rapes of Dalits between 2015 and 2020. But does justice follow? Rarely. National Crime Records Bureau data showed that nearly 71,000 crimes against Dalits were pending investigation at the end of 2021, with Uttar Pradesh, Bihar and Rajasthan reporting more than half of India’s crimes against Dalits.

The bureau also says that cases of physical attacks on women have been increasing. In 2019, there were 405,861 cases of assaults on women — a 7% rise over 2018. These crimes include beating, stripping, kidnapping and rape. Of these, 13,273 assaults, which included 3,486 cases of rape, were against Dalit women.

We all know that the actual figure is higher because many such crimes go unreported, simply because justice is quite simply out of reach for Dalit women. They are thwarted at every step of the process. The police are reluctant to register complaints, dismissing them outright or heaping further humiliation on the victims. Then come the hurdles in evidence collection and testimonies because investigations are either simply not carried out or are delayed. Witnesses regularly refuse to testify for fear of retribution from perpetrators. If the case does manage to reach the court, the victims often have to face biased judges who can skew the dispensation of justice.

And does the media fill the gap by giving adequate coverage to the issue? The fact is that caste-based stories get some coverage in the mainstream media but it’s not proportional to what is happening on the ground. The cases that do come to light are only a fraction of the overall crimes committed. And this is due in large part to even newsrooms lacking Dalit representation. As I said in an earlier episode, Dalits are missing in newsrooms and even stories about the lower castes are covered by upper caste journalists. This means that critical perspectives are missed.

I’ve touched upon the lack of economic power they have but let me detail it. Dalits are usually reliant on dominant castes for their livelihoods and most lack even an iota of economic agency. If the victims of sexual assault are dependent on their survival on their assailants, justice can be very, very distant. In many instances, victims and witnesses are coerced into silence or to settle the cases out of court.

This seems to have become even more entrenched since the early 1990s, coinciding with the rise of the right wing and its backlash against the simultaneous upsurge of Dalit rights movements.

It’s not as if we don’t have laws to guard against such crimes but their enforcement is abysmal. But the real solutions are not legal, but systemic and foundational. There is an urgent need for economic empowerment of the Dalit community, especially the women. Land reforms or redistribution could be part of the solution. Also, there is no justification for the law not being implemented. Education for Dalit women as well as on gender equality for the men is urgently needed too.

I’m not a great fan of the way sexual crimes against Dalit women have been handled by the government. The Hathras victim was cremated in a hurry and against her parents’ wishes. Siddique Kappan, a journalist trying to cover the crime, was arrested and has been in jail for two years. What’s needed is aggressive action against the perpetrators and a clear sign that the law will be enforced.

Without it, India can’t hope to have social balance.

How can we have such a large component of our population subjected to this kind of trauma and injustice? What does it say about us as a society and country? Don’t our women, especially the most disadvantaged, matter? This is a social tsunami that is best dealt with through the medicine of gender and legal justice. India needs it, and it needs it now.