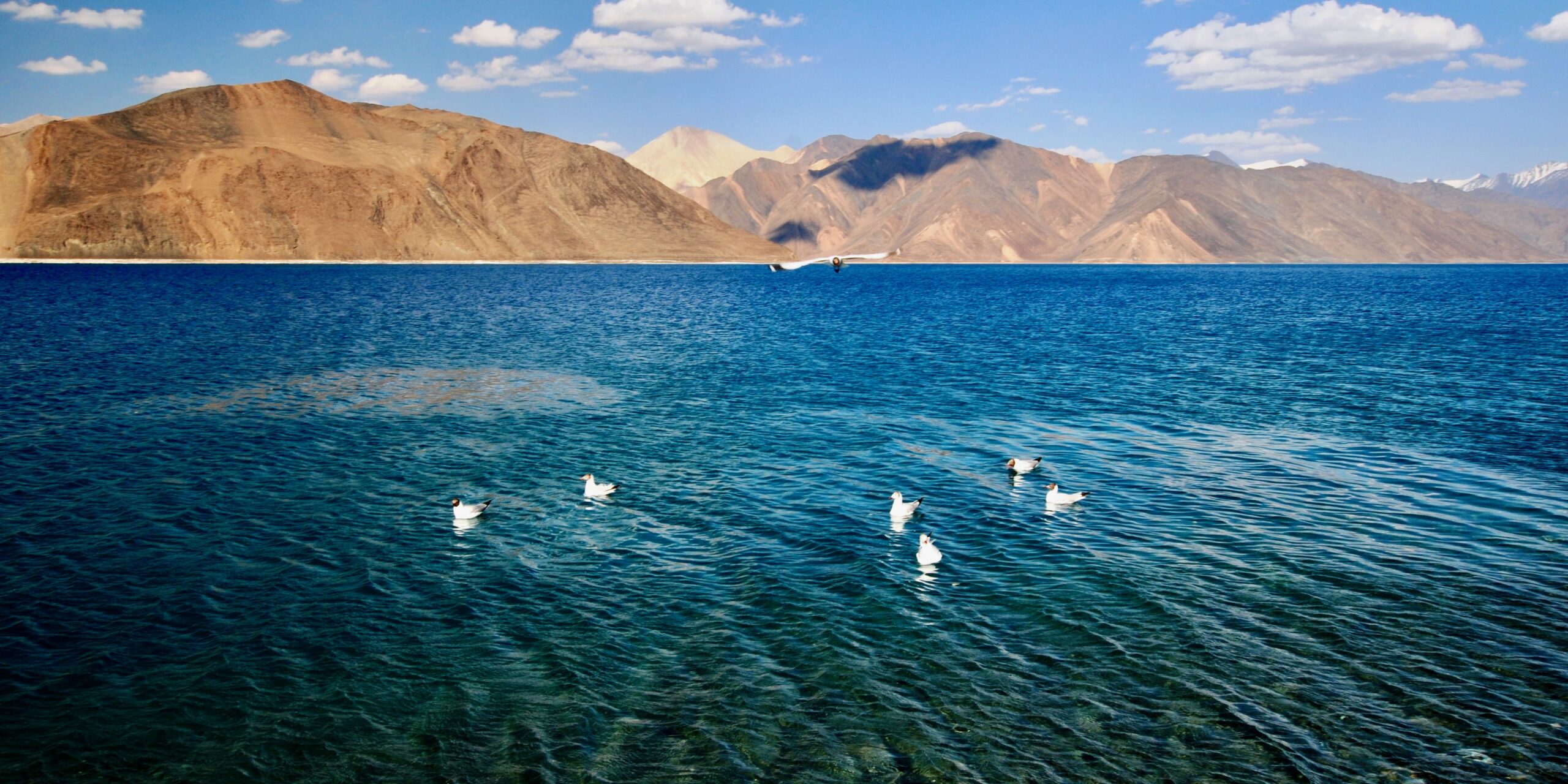 Picture: On Finger 4, north of Pangong Tso lake (above), Indian and Chinese troops were deployed a few hundred metres apart. On its south bank, they were occupying heights that overlooked each other’s camps and vital road links.

At the time of making this podcast, India and China were still engaged in a tense standoff at the Ladakh border. China had intruded past the Line of Actual Control and occupied Indian land in an attempt to alter the territorial status quo permanently.

While the Indian government initially denied that any land had been taken, it has also engaged in army- and diplomatic-level talks to get the Chinese to withdraw. These are contradictory moves and makes one wonder what exactly is going on at the border.

A meeting between foreign ministers S Jaishankar and Wang Yi in Moscow was indecisive just like the one between between defence ministers Rajnath Singh and Wei Fenghe earlier on September 4. Other than a token withdrawal, China is in no mood to step back from the territory it occupied in May.

China has expressed its territorial ambitions earlier too by laying claim to parts of Arunachal Pradesh. Who knows what will come next!

India, meanwhile, has responded with caution, wary of a localised conflict turning into a full-fledged war.

The longer the stalemate continues, the less likely it is that China will return the territory. Unable to gain substantial ground, the Narendra Modi government has come across as weak and unable to change the reality.

Add to this the tremendous expenditure of a prolonged standoff in some of the most hostile military conditions on Earth. This, at a time when one-fourth of the Indian GDP has been wiped out due to several weak quarters, the lockdown and the inadequate government response to it.

While there have been many areas of cooperation between India and China, the fact is that the two countries are rivals jostling for greater influence across Asia and the world. China has used its stronger economy and global influence to block India’s ambitions – for instance, a permanent seat on the UN Security Council.

There was a framework of cooperation built over the decades but it now lies in shreds.

So, what can India do? It’s clear that the old method of not antagonising China and hoping for the best won’t work.

The first step should be to build a stronger economy. Without it, India cannot compete with China in a meaningful manner. Unfortunately, we haven’t had good economic management in the last six years. Disastrous decisions like demonetisation and a lacklustre post-COVID stimulus are but two examples of it.

As a result, India’s resources for crucial military modernisation are limited. At the moment, the government is grappling with serious domestic economic distress and a society in turmoil because of its Hindu supremacist philosophy. A thriving economy is a national security imperative and the Modi government has done terribly on that front.

This is coupled with multiple foreign-policy failures.

Take a look at our neighbourhood. Sri Lanka has already shown a marked preference for China. Its exports to China are growing fast and it has signed over Hambantota port to China through a 99-year lease. This is a key strategic move by China, putting its navy within striking distance of India.

Pakistan is a long-time ally of China, hoping to counter-balance India’s influence in the region. Nepal, too, has started making anti-India noises.

To make matters worse, a Pentagon report says China is seeking to set up robust logistics facilities in a dozen countries, including three of India’s immediate neighbours – Pakistan, Sri Lanka and Myanmar. These facilities will enable the Chinese army to project and sustain military power at greater distances. The other countries it is looking to base military logistics and infrastructure facilities in are Thailand, Singapore, Indonesia, the United Arab Emirates, Kenya, Seychelles, Tanzania, Angola and Tajikistan.

These are aggressive moves, but since 2014 Chinese capital has flooded into India. Until that year, Chinese investments in India were valued at $1.6 billion, according to official figures. Most of that was in infrastructure. Within three years, the investment increased five-fold to at least $8 billion, according to Beijing’s Ministry of Commerce, driven by investments from the Chinese private sector. However, this is likely to be an underestimation because it does not factor in Chinese companies’ stakes in technology companies nor investments routed through countries like Singapore.

According to the Brookings Institution, the total investment could exceed official figures by at least 25%. When announced projects and planned investments are included, the figure could be in excess of $26 billion.

In greenfield projects and capital used to acquire or expand facilities in India, Chinese companies have invested at least $4.4 billion. They have also acquired stakes in Indian pharmaceutical and technology companies, and funded several startups. Another $15 billion have been pledged by Chinese companies either as investments or as bids for major infrastructure projects.

These investments give China a strategic advantage while dealing with India.

The Indian government, meanwhile, responded to the border intrusion with a call for the boycott of Chinese goods, laughable for its lack of imagination or effectiveness. It then called for atmanirbharta, or self-sufficiency, but without a roadmap of how to get there. The government has not acted with alacrity, trying to downplay the standoff and duck questions on it in Parliament by seeking to do away with Question Hour instead. This isn’t the act of a government that has a grip on things.

Logically, the first step should be to identify products whose imports from China have been increasing and which can be made locally. By imposing China-specific duties for products like consumer appliances, Indian manufacturers would be encouraged to step up production – thus boosting growth and creating badly-needed jobs.

In those areas India is dependent on Chinese inputs, such as pharmaceuticals, we could look at sourcing from other countries.

Look at the UK. It has decided not to allow Chinese participation in 5G services and to phase out Chinese telecom equipment by 2027. We could take a leaf out of that book to reduce vulnerability in telecom.

Our soldiers need our support – not through slogans but real action on the economic and diplomatic fronts that will make the border safer.

As I record this podcast, the Indian government still won’t allow Question Hour or be forthcoming on how it plans to retrieve Indian territory from China. But, if questions won’t be allowed inside Parliament, we can still ask them outside it.