Audio podcast: As journalists take flight in Afghanistan, so does hope 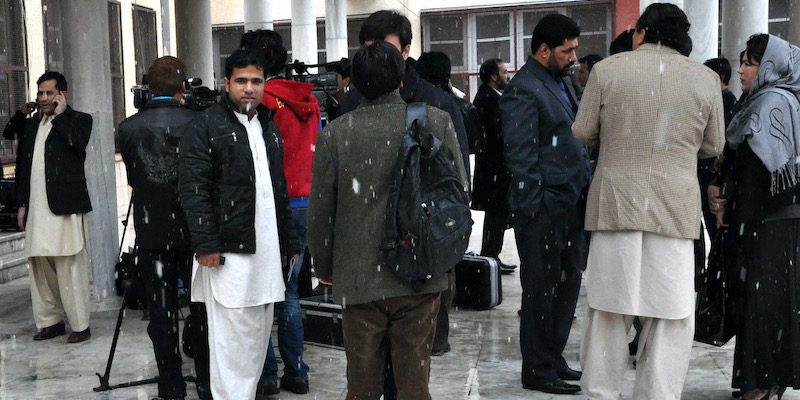 Afghan journalists speak with MPs outside the lower house of Parliament in Kabul in February 2011.
Picture and copyright: Ashraf Engineer

This episode takes a slight detour from what I normally do – analysis of national issues. This episode is partly a walk down memory lane and partly commentary. We all know of how the Taliban captured Afghanistan at lightning speed, and we’ve all seen the disturbing visuals coming out of there – from Kabul airport in particular. In 2011, I was appointed as lead trainer for first-generation journalists in Afghanistan’s capital. The time I spent there gave me a first-hand look at how Taliban rule had devastated the country and how its brave journalists were standing up to tremendous pressure and risk. They viewed their work as a vital building block in the rebuilding of their country and as a safeguard of the freedom that Afghanistan had paid countless lives for. What are they up against today? And what will happen of them in the days to come?

“We have no President, no ministers, no governor, no police chief. We are truly a ‘free’ country,” chuckled a close friend in Kabul when I called him the other day.

As news poured in of the Taliban scything through Afghanistan, capturing city after city and finally Kabul, I frantically tried to get in touch with my friends and former colleagues there.

I rarely mention it but I miss every day the sight of the jagged, snow-capped mountains ringing the city. I can still hear the howling winter wind that sounded like it was telling tales of ancient battles, kings and conquerors, of war cries, of horses rearing and foaming at the mouth as they went into battle, of swords clanging and honour and glory, and everything that matters to a martial race. I miss the pink, swirling dust that seemed to coat everything, including currency notes and phones.

The drives through Kabul were mesmeric – lone apartment blocks overlooking crumbling homes made of a mixture of mud and straw, many of them ranged precariously along hillsides, hanging on to the slopes through sheer willpower.

There were many structures with gaping mortar holes in their roofs and sides, while the Dar-ul-Aman palace – which must have been grand in its prime – was perforated with machine-gun fire and bazooka shots. Not far from it was a camp of the international security forces, from where sounds of bombs going off and gunfire during training exercises would waft lazily towards the ruined, broken former home of a king. Its passages formed a natural tunnel for the wind, which I felt would freeze my blood.

I knew that what I was experiencing in Kabul was a once-in-a-lifetime thing, so, when no one was looking, I sneaked into my pocket a piece of the carved ceiling, which had caved in. Today, it lies wrapped carefully under layers of bubble wrap and cloth in my cupboard. I was told later that it was a crime to have taken away that piece, so, I guess, I’m now an international criminal.

While there are several geopolitical concerns around the ascendance of the Taliban, I want to focus here on Afghan journalists – particularly the women.

The Taliban are no friends of journalists and abhor the idea of women being in a position to criticise them. For now, my friend – a top journalist with Tolo News, Afghanistan’s leading news channel – says they have been assured that they will come to no harm. Some women journalists have been reporting bravely from various locations and have even appeared as anchors on TV. However, no one expects this to last.

The Committee to Protect Journalists has expressed fears that the Taliban pose an extreme danger to Afghan journalists. Their fears were intensified when Talibs gunned down a radio station employee recently.

My friend in Tolo News told me that his team has moved into the newsroom, having already spent a few nights there. I suppose they fear that they could be followed to their homes and their families targeted. They must also be fearing that, once they leave the newsroom, the Taliban will not allow them back in.

My mind and heart go back to 2011, to the training sessions in poorly-heated rooms, the grey, angry sky pelting snow at Kabul. Afghanistan had, for the first time, something resembling a free media. At least two generations had no idea what it was and the journalists had no seniors to learn from or any reference points when it came to news sense, story structure or research.

My classrooms had print, wire, radio, TV and internet journalists. At least a third of the participants were women, many of whom had battled family opposition, social ridicule and economic hardship to pursue a passion and clear a path for the women journalists that would follow. Once an interpreter told one of them: “Who will marry you if you continue being a journalist?” She didn’t bat an eyelid as she replied: “It’s something I’d readily forego for Afghanistan.”

Indeed, the hope that their work was integral to the creation of a new Afghanistan – prosperous, literate and respected – was their principal motivation. Along the way, they wanted to ensure that women would one day become equal partners in what has been for ages a deeply patriarchal society.

Most of them would recall their childhoods in refugee camps across the border in Pakistan and then returning to what they thought would be a fresh start. Many of the women would say how they had to cover themselves from head to toe even as children or risk punishment in the form of beatings by the Taliban or, in some cases, having acid thrown on their faces. The men would tell me how they had to grow their beards and some of them forced to wear turbans tied in a certain manner. They would be questioned often when they stepped out, especially if it was evening or dark.

Free after years, they – especially the women – were so eager to learn that no sooner would I finish making a point than their calls of “Ustad Ashraf, Ustad Ashraf” would fill the room, followed by a barrage of questions.

The focus of my sessions was on covering Parliament. Again, this is not something they had any experience of. But the women made sure they were at the front of the media scrums when Members of Parliament met with mediapersons, and their questions were sharp. They had a point to make, after all. I do believe that many of their male colleagues felt a little inadequate compared to them, though they never let on.

India is in a position to help these journalists. Many of them require safe passage out of Afghanistan and we can help with visas and logistics. We can also help through funds. Most importantly, we can use our position in the United Nations Security Council to build international pressure on the Taliban to ensure the safety of these brave journalists.

Over the years, I have tried to keep track of all my students and colleagues. It breaks my heart that I have lost so many to targeted attacks or bomb blasts. They were all proud Afghans who took part in the effort to build a ravaged country from the ground up. They all made huge sacrifices while they were alive and paid with their lives in the end.

I now fear that their lives have been lost in vain, and their labours will come to naught.

My friend in Tolo News said many journalists are looking to leave Afghanistan now, but the chaos at Kabul airport means they will have to wait before they can escape.

“Where will they go?” I asked.

“Maybe India. Maybe Uzbekistan. Perhaps Europe or the US – wherever they can,” he said.

With them, the hopes of Afghanistan will take flight too.