Audio podcast: How India messed up its vaccine strategy 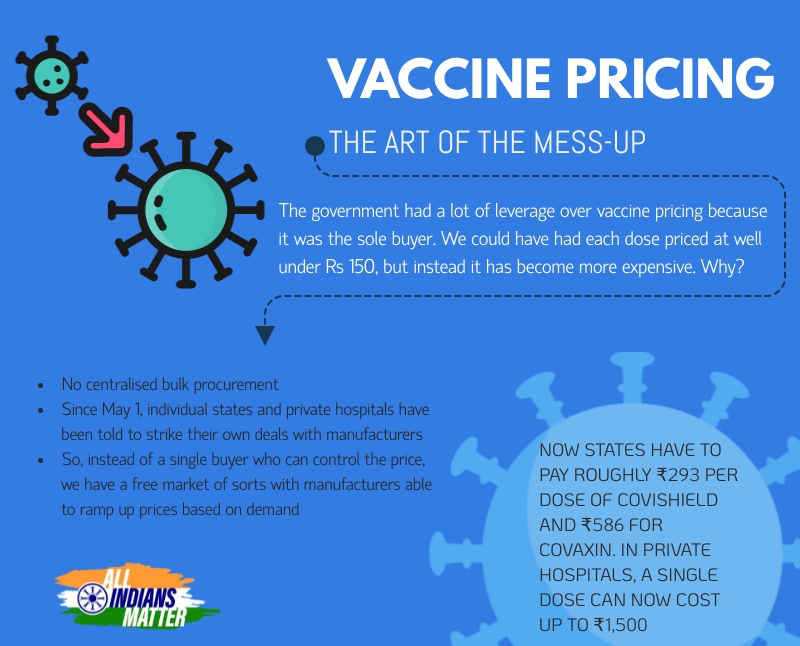 It would be comical if it wasn’t so tragic that the Narendra Modi government opened up COVID-19 vaccinations for roughly 960 million Indians without procuring anything close to the 1.8 billion doses required. If you’re kind, you’d call it a miscalculation but if you want to be accurate it’s sheer negligence. The shortfall comes smack bang in the middle of a deadly second wave in which more than 300,000 Indians are getting infected and 4,000 are dying every single day. These are only the official numbers; most experts believe the crisis is much greater. It’s a story of bad planning, thoughtless procurement and the less said about the pricing the better. Don’t forget that a third wave is expected soon. So, it’s ironic that the world’s largest vaccine manufacturer is facing a deadly shortage of doses.

Experts agree that a massive vaccination drive over two to three months is the only viable way for India to protect itself from the third wave of COVID-19. Dr Devi Shetty, chairperson of Narayana Health and a member of the Supreme Court-appointed national task force to oversee the distribution of medical oxygen, told the media that India can vaccinate 510 million people easily in two to three months.

“Vaccination is by far the best and the cheapest solution,” he told India Today. He added: “We need to vaccinate everyone above the age of 18 years. If we can give that kind of care, mortality will come down significantly.”

The problem, of course, is that vaccines are in very short supply. Blame it on the lack of planning and a failure to spot the obvious. India waited till January 2021 to order vaccines when it should have done so much earlier. Between January and May, India bought 350 million doses of the Oxford-AstraZeneca jab, manufactured as Covishield by the Serum Institute of India, and Covaxin, made by Bharat Biotech. That’s not enough for even 20% of the population.

Modi, never averse to hyperbole or poor decision-making, declared that India had defeated COVID and exported more doses than were administered in India by March.

Let’s not forget the flip-flop either. Initially, Modi announced vaccines for everyone but then said only 300 million need to be vaccinated to break the virus’ chain of transmission. For even that number to vaccinated, India needed 600 million doses but there was barely any attempt to ensure their supply.

Look at what the United States or the European Union did – they pre-ordered more doses than they required nearly a year before the vaccines became available. This is sensible because it not only makes business sense for vaccine manufacturers in the form of a guaranteed market, they could plan production and logistics well in advance.

Normally the government makes a huge noise about local manufacturing, so why didn’t it invest in local vaccine production? In fact, India waited until April 20, 2021, to extend advances of $610 million to the Serum Institute and Bharat Biotech. By then, we were well into the second wave.

That’s not all the government bungled. Initially, it announced jabs for everyone above the age of 45, and added the 18-44 category soon after. That set the target population at 960 million, which meant a requirement of roughly two billion doses. However, only 500 million doses had been assured till July 2021.

Why didn’t the Modi government authorise other manufacturing facilities – biologics factories, for instance – to produce vaccines? Only recently have four other firms, including three government-owned ones, been given the rights to make Covaxin.

Compare that to the Russian developers of the Sputnik V vaccine who had by early April signed manufacturing deals with Indian pharma companies to produce it in great numbers.

Let’s talk about the pricing now.

In the case of COVID vaccines, the government had a lot of leverage over pricing because it was the sole buyer. We could have had each dose priced at well under Rs 150, but instead it has become more expensive. Why? Because there was no centralised bulk procurement and, since May 1, individual states and private hospitals have been told to strike their own deals with manufacturers.

As a result, instead of a single buyer who can control the price, we have a free market of sorts with manufacturers able to ramp up prices on the back of demand. So now states have to pay roughly Rs 293 per dose of Covishield and Rs 586 for Covaxin. In private hospitals, a single dose can now cost up to Rs 1,500 and even more in some cases.

Imagine, this after the manufacturers lowered prices a “philanthropic gesture”. No wonder Opposition parties have called it a scam. The fault lies clearly with the government. India is perhaps the only country where the federal government is not the sole buyer, and one of the very few where all vaccinations are not free.

Desperate, some states are trying to import vaccines from companies like Pfizer, Moderna and Johnson & Johnson but all three have said they would not be able to send any till the third quarter of 2021.

Sputnik V, meanwhile, has been approved but it’s unclear when the doses can be administered.

Vaccinating our large numbers is a daunting task but India has a superb record of mass inoculation – take the polio vaccine, for example. This is not an impossible task but it requires planning and commitment.

Even experts who were helping the government are upset. For instance, renowned virologist Shahid Jameel resigned as chairman of the scientific advisory group the government set up to understand COVID variants and their impact across geographies. Jameel is director of the Trivedi School of Biosciences at Ashoka University and was among the first to join the advisory group named ‘Indian SARS-CoV-2 Genome Sequencing Consortia’, or INSACOG.

He is now an outspoken critic of the government’s decision-making. Four days before his resignation, Jameel wrote in the New York Times that India has to increase testing and start isolating infected people. He ended his article by writing: “All of these measures have wide support among my fellow scientists in India. But they are facing stubborn resistance to evidence-based policymaking. On April 30, over 800 Indian scientists appealed to the prime minister, demanding access to the data that could help them further study, predict and curb this virus. Decision-making based on data is yet another casualty, as the pandemic in India has spun out of control. The human cost we are enduring will leave a permanent scar.”