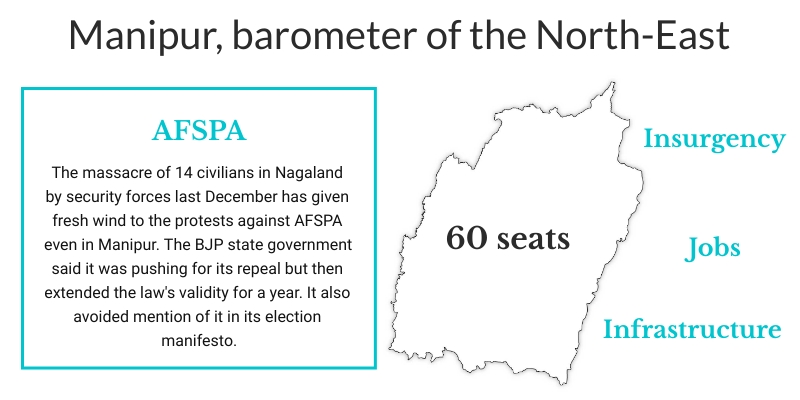 Last week, we talked about the state elections in Uttar Pradesh, Punjab, Uttarakhand and Goa. Manipur is the fifth state holding Assembly elections and is scheduled to vote in two days of this episode going live. The North-East is not just strategically important to India, it is also one of its most disturbed regions with insurgencies, violent inter-state battles and the hugely controversial Armed Forces Special Powers Act, or AFSPA, at the centre of a long-standing public agitation for its withdrawal. AFSPA gives the armed forces the power to use force and kill merely on suspicion of a person being in  contravention of the law. The army can also arrest a person, enter or search a premises without a warrant and ban the possession of firearms. There is a demand across the North-East to junk AFSPA and a political war has broken out over it. The Bharatiya Janata Party’s manifesto has no mention of it while the Congress has committed to withdrawing it. It has also accused the BJP of conspiring to keep AFSPA imposed on Manipur. That and several other issues are what this election hinges on.

The massacre in Nagaland last December, in which the security forces killed 14 innocent civilians, has only amplified the North-East’s demand to repeal AFSPA. Manipur Chief Minister N Biren Singh claimed his government asked the Centre to remove the ‘Disturbed Area’ tag from Manipur in order to enable the repeal. However, in an apparent U-turn, his government extended AFSPA for another year. This has intensified public anger and protests against it.

The Congress’ Manipur in-charge, Bhakta Charan Das, accused the BJP of reducing AFSPA to a tool of “organised violence” against citizens, adding that the demand for its repeal was justified and that the BJP was “not respecting” people’s views. The Congress promised to push for the repeal if voted to power in Manipur. The BJP, clearly on the backfoot on this issue, said it would look at the law as and when needed and has chosen instead to focus on jobs, agriculture, women’s empowerment and other such areas in its manifesto.

It must be remembered that AFSPA was introduced in the region because it was riddled with insurgencies and the security forces felt they needed a powerful legal shield. However, the people say the law has been used only to terrorise them and enable the indiscriminate killings of innocents.

Here’s what Nicky Soram, a 22-year-old student from Thoubal, had to say.

Speaking of security, that too is on top of voters’ agenda. The continuing skirmishes between the security forces and insurgents have everyone on edge. There are said to be 30 insurgent outfits, many of them splinter groups with different secessionist demands. These apart, 16 Kuki organisations are seeking a separate state for themselves and so are eight groups of the United People’s Front. There are varying levels of support they receive from the people but there are no two views on the need for internal security.

Let’s come to unemployment now. Like in every state we have put under the microscope so far, it’s rampant in Manipur too. Among North-Eastern states, the unemployment rate in Manipur – 9.5% – is the second highest after Nagaland, and the COVID-19 pandemic only made it worse.

The ruling BJP has responded predictably, announcing 13 infrastructure projects worth Rs 1,858 crore and nine other projects worth Rs 2,957 crore, to be completed over 10 years. Like it is in other states, how and when these projects fructify and how many jobs they create remains to be seen.

Let’s take a look at the social mix too. Meiteis, who account for nearly 57% of the state’s population, want to be classified as a Scheduled Tribe in order to avail benefits of reservations in government jobs and educational institutions. The Meitei community of Manipur is predominantly Vaishnavite Hindu. If they are included in the Scheduled Tribes list, they will officially be considered a tribe, giving them the right to buy tribal lands in the hill areas. This has split Manipuri society down the middle because the tribes in these areas fear a land grab by the Meiteis and being driven out of their tribal lands.

Among the political leaders in the fray, sitting Chief Minister N Biren Singh, a former footballer and editor of a vernacular newspaper, is contesting from his stronghold Heingang in Imphal East district. He has been winning from there since 2002. Okram Ibobi Singh, a former Congress chief minister, is fighting from the Thoubal seat. His party colleague, Seram Neken Singh, is fighting from Thongju. All three of them are expected to be major players once the results are out.

Meghalaya Chief Minister Conrad Sangma’s National People’s Party is fighting on more than 40 of the state’s 60 seats. In a speech in Imphal, he said there is no difference between the Congress and BJP regimes and that neither party truly understands the North-East. Lastly, the Naga People’s Front is fielding 10 candidates – including four sitting legislators.

How these two parties affect the vote shares of the Congress and the BJP could prove decisive in the election.

As a political strategy, the Congress is following the Assam model by forming an alliance with five other parties – the Janata Dal (Secular), the Communist Party of India, the Communist Party of India (Marxist), the Revolutionary Socialist Party and the Forward Bloc. The Congress argues that these parties are likeminded and secular, and says there will be a common minimum programme to guide governance if they win.

The BJP has not inked a pre-poll alliance.

As far as its importance at the national level goes, Manipur has one Rajya Sabha seat and two in the Lok Sabha.

Manipur is among the states that have had a particularly tumultuous election history. After becoming a state, it held its first election in 1972 with 40 seats in the Meitei-dominated valley area and 20 in surrounding tribal hill districts. While the hills account for nine-tenths of the state’s geographical area, they are sparsely populated. The Meitei community is in majority in the Imphal Valley, while the hills are inhabited by Nagas and Kukis. The state’s long-standing political divides reflect these geographical and ethnic divisions.

The Ibobi Singh regime saw frequent turmoil and economic blockades as well as widening rifts between the hills and the valley.

The Congress remained the dominant force over the years but, like other North-Eastern states, Manipur later tended to vote for whoever was in power at the Centre. That’s how the BJP managed to make its way to the centrestage there. And that’s how the 2017 Assembly election became a watershed for Manipur politics. The BJP ended the Congress’ dominance by forming a coalition government. The Congress’ 15-year rule gave way to this BJP-led coalition despite the former emerging as the single largest party.

The North-East has been simmering for years and this election will signal the mood across the region, not just in Manipur. The BJP has identified the North-East as a focus area of growth as a party and has been campaigning aggressively. But, will AFSPA and unemployment lead to its downfall?

Reporting for this episode was done by Apurav Shrivastava.