Audio podcast: Why are right wingers so afraid of stand-up comedians? 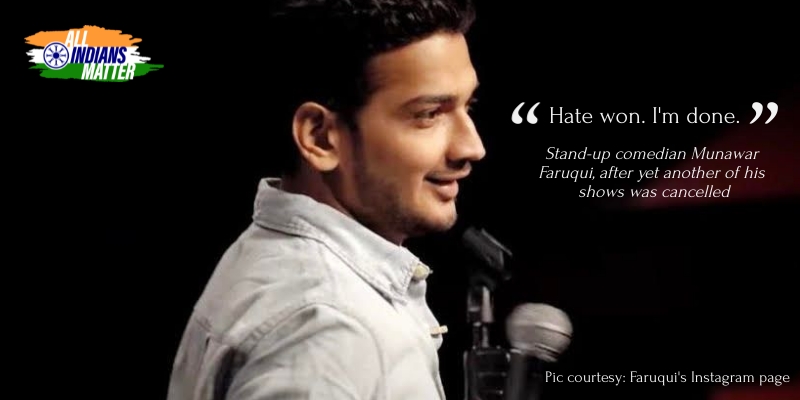 What is it about comedy and stand-up comedians that gets the Sangh Parivar and right-wingers so wound up? Recently, several shows of stand-up comedian Munawar Faruqui were cancelled after threats were issued by the Bajrang Dal, a militant group associated with the Vishwa Hindu Parishad and part of the Sangh Parivar. In Bangalore, it was the police, shockingly, that wrote to organisers forcing a cancellation of his show. The reason cited: Faruqui is a “controversial figure”. Bangalore is the capital of Karnataka state, which is governed by the Bharatiya Janata Party, which too is part of the Sangh Parivar. As if India needed a further reminder that political humour is easily taken offence to, a trend that’s become more entrenched since Narendra Modi and the BJP came to power.

Munawar Faruqui is the same comedian who was arrested for a joke he did not crack and spent more than a month in jail. He’s Muslim and is in the crosshairs of militant Hindu groups that are targeting his livelihood.

“I get 50 threat calls daily; I had to change my SIM card thrice,” he said in a media interview.

When he was arrested, Faruqui was accused of making fun of Hindu deities and insulting religious sentiments. However, the police had no evidence against him and the Supreme Court granted him bail but only after a very long wait.

In another media article, he claimed that the national environment has become steadily more intolerant over the past two years and that people are quick to outrage. “In the last two months, 12 of my shows, all sold-out, have been cancelled. The threats have been extreme, persistent and chilling. Organisers of venues have been threatened over phone and in person,” he said. The threats ranged from self-immolation to setting the venues alight. A 65-year-old woman, the owner of a venue, was abused and manhandled, and her staff beaten up. Faruqui pulled out of the show, as any right-thinking person who cares about others would.

Faruqui, who’s performed to sellout crowds at scores of venues after his release, pointed out that his shows had no reference to religion.

Faruqui is not the only comedian to be targeted. Recently, Vir Das was attacked on social media for his ‘Two Indias’ set delivered in the US. Das stood his ground, saying he would keep writing and performing work that spoke about realities in India.

Last year, right-wing thugs went on the rampage after comedian Agrima Joshua mentioned a planned statue of Chhatrapati Shivaji in one of her shows. Not only did they vandalise a venue, they threatened to rape her. Joshua was eventually forced to issue an apology. Later, a dejected Joshua told a media house: “My parents have lost faith in the systems they had earlier. They kept telling me not to raise my voice, not speak up, keep my head down and not get involved. If somebody wants to get you, they will.”

Other comedians like Kunal Kamra and Varun Grover too have had to face a backlash for their outspokenness. Kamra has had several cases filed against him and even faced a flight ban for confronting pro-BJP TV anchor Arnab Goswami on a flight. Grover wrote on Instagram: “…our systems now just want to brutally silence every voice. They don’t want to hear, they don’t even want to argue – they simply want to erase every shred of individual thought…”

There was a time when right-wing trolls stuck to social media. That was distressing enough but now they are making good on their threats of violence as the state machinery eggs them on by looking the other way.

Every citizen – you, me and the comedians – have a fundamental right to free speech. So, when a comedian expresses an opinion, he or she is protected by Article 19(1)(a) of the Constitution.

Even the Supreme Court has said: “Open criticism of government policies and operations is not a ground for restricting expression. We must practice tolerance to the views of others. Intolerance is as much dangerous to democracy as to the person himself.”

More recently, in the case of Ashutosh Dubey versus Netflix, the Delhi High Court said: “It is a known fact that a stand-up comedian, to highlight a particular point, exaggerates the same to an extent that it becomes a satire and a comedy. People do not view the comments or jokes made by stand-up comedians as statements of truth but take them with a pinch of salt with the understanding that it is an exaggeration for the purposes of exposing certain ills or shortcomings.”

The court added: “Satire is a work of art. It is a literary work that ridicules its subject through the use of techniques like exaggeration. It is a witty, ironic and often exaggerated portrayal of a subject.”

You would imagine that such common-sense judgments would eventually create an atmosphere of tolerance. But that hasn’t happened.

It’s time for us, as a society, to introspect about what we wish to be. Do we want to be one that stifles speech and freedom and, in the process, one day finds that our own freedom of speech has evaporated? Or do we want a vibrant society with a multitude of thoughts that may or may not match our own but which enrich our national debate and pave the way for a better country?

As things stand, comedians believe that India is not ready to be shown the mirror. However, we simply cannot have any more Munawar Faruquis. A nation of 1.3 billion simply cannot be this insecure about itself. And if it is, what does it say about us?

Maybe Vir Das is right when he says in his ‘Two Indias’ monologue: “I come from an India where our music is bahut hard, but our sentiments are bahut soft.”