Heroism and compassion amid the horrors of Partition – Part 2 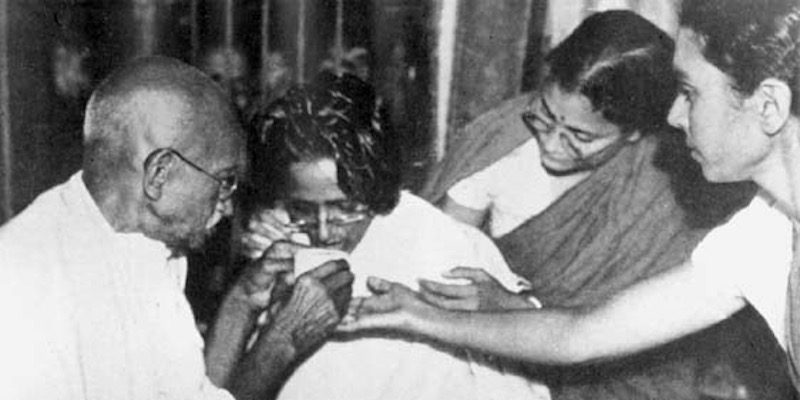 Bibi Amtus Salam ending her 26-day fast after the signing of the peace pledge in Sirandi.
Photo credit: MK Gandhi Institute for Non-Violence

This is the final installment of a two-part series on the acts of courage, which symbolised the syncretic heritage of the subcontinent, amid the communal savagery that marked the Partition of India

Mahtama Gandhi’s peace mission in Noakhali attracted help from all over India. A group of Ahmadiyas, a persecuted sect of Muslims from Punjab, sent Rs 5,000 as relief for their “brothers” in Noakhali. In a letter, the secretary of the Ahmadiya organisation wrote: “I have to mention in this connection that Islam, as a principle, stands for the assistance and emancipation of all the distressed and downtrodden, irrespective of class or creed and we consider it our sacred duty to render every possible help and cooperation for the relief of the distressed, whosoever they may be.”

Another cheque for Rs 650, along with 200 pairs of conchshell bangles and a pound of vermillion sindoor, was received for distribution among Hindu women, victims of the riots. The donors were 11 Muslims and a European from Assam.

When we commemorate the horrors of Partition, we must pray to atone for the crime against humanity that was committed at that time, we must pray for a healing with the objective of reconciliation, not to perpetuate hate.

The courage of Bibi Amtus Salam

When Bapu reached Sirandi during his solo peace pilgrimage, Bibi Amtus Salam was working to establish peace there and reconcile the two communities. She had been on a fast for 25 days against some local Muslims.

Bibi was a strict Muslim who practised all religious duties with extreme discipline. Since childhood, she held Hindu-Muslim unity as her life’s supreme goal. During the Partition riots, she rushed to many troublespots in Delhi, Calcutta and Dacca (as Dhaka was known then) and intervened to bring the situation under control, often risking her own life to save many families, women and children irrespective of their religion. What led to Bibi Amtus Salam going on a fast was an incident at Sirandi. There was an old Kali temple in the village where Hindus would offer sacrifice. There were three sacred swords, or khadags, in the temple used for the sacrifices. The ritual was that the khadags would be sharpened and blessed before the ritual.

Before the riots began, the khadags had been prepared for the festival of the goddess. This practice was exploited and a rumour was floated that the Hindus were planning to attack Muslims. The swords, the rumour went, were to be used in the attack.

When riots erupted, along with Hindus the temple was also attacked and partly demolished, and the priests were murdered. The three sacred khadags were carried away by the looters. After the Gandhi Peace Mission managed to establish peace, the one sore point that kept the distrust and enmity alive were the three missing khadags.

Bibi too was concerned. She realised that the khadags had become a symbol of the persecution of Hindus and their return would help establish confidence and maybe even bring about normalisation. She took it upon herself to retrieve the khadags. She met community leaders, both Hindu and Muslim. She realised that Muslims involved in the carnage were reluctant to return the khadags because for them they were tools to subjugate Hindus. Finally, after trying her best, Bibi utilised the weapon of satyagraha – fasting. She declared that she would shun food and water until all three khadags were returned. This resulted in two of the khadags being returned but Bibi insisted on all three. Her health was deteriorating; she was suffering from fever and a racking cough, but her resolve was unwavering.

When Bapu was informed about Bibi’s unflinching stance, he wrote to her: “It smacks of impatience. You want to take the law into your own hands and dictate terms to Lord God Himself, insisting on submitting to the agony of a prolonged fast.” Bibi relented and decided to consume a limited amount of water, but she insisted that her fast would continue till all three khadags were returned to the temple. The local Muslims remained unmoved and the police declared their helplessness. They even accused Bibi of “obstinacy” and “wilfulness” in making a major issue out of, what they called, a trifle. They complained to Bapu, who told them that they should do what their duty demanded and nothing more: “If she is obstinate and dies, let her die and die disgraced. If she is right and the right is not vindicated in her lifetime, death will be a fit atonement.”

And so her fast continued. After 12 days, as her life ebbed away, Bibi was cheerful and at peace. Non-stop recitations of shlokas from the Gita and ayats from the Koran comforted her.

Bapu arrived at Sirandi on the 25th day of her fast. A large gathering of Muslims met him, pleading with him to get Bibi Amtus Salam to relent. They told him that they had tried their best to recover the third khadag but had failed.

Bapu reflected on the philosophy of fasting as a weapon of satyagraha. The two crucial phases in fasting were its beginning and end. A hasty recourse to fasting was sinful, so was its prolongation due to obstinacy, pride or intoxication due to success after its conditions had been essentially fulfilled. But equally sinful was its premature termination out of weakness or the will to believe that its terms had been fulfilled, when in fact they were not.

Finally, he proposed a peace pledge which he would draft and all the gathered Muslims would have to sign and promise to abide by. Bapu warned them that any breach of the promise would lead to him embarking on a fast unto death. The declaration was signed by 11 leading Muslims from the surrounding four villages. The 12th member, who had first spoken on behalf of the Muslim assembly, did not sign. He had gone away to “attend a meeting” miles away. There were several reports that he was responsible for the forcible conversion of many Hindus during the disturbances. Some Muslims argued that since the village he hailed from was not part of the area which fell under the jurisdiction of the pledge, his signature was not necessary. But, Bapu insisted on it. If the reports against him were true, it was necessary that he show repentance and give a guarantee for the future. His signature was obtained the next morning.

The Muslims argued that cases of petty thefts were common and not communal in nature. Would Bapu go on a fast if thefts occurred and the signatories were unable to prevent them even though they were not communal? Bapu explained that he would give the signatories adequate opportunity to vindicate their position before he took any step. At the same time, he warned, there was enough reason to believe that much of what had occurred during the disturbances and which continued to happen under the guise of petty theft was definitely communal in character. If the thugs could do what they liked with the Hindu minority without a serious effort being made by the Muslims to restrain them, it meant that the thugs enjoyed the community’s support. It was important, therefore, that Muslims prevent all such cases of theft, persecution and terrorism and see to it that full justice was done.

Bapu then explained the significance of the pledge to Bibi Amtus Salam and after the recital of Al-Fateha, she broke her 26-day fast by taking three ounces of diluted orange juice from a glass held to her lips by Bapu.

The third khadag was never found but the threats, communal harassment and thefts stopped. The malady was too deep-rooted to be uprooted by anything but an all-purifying fast. Bibi Amtus Salam’s fast was the catalyst of change. Things improved steadily at Sirandi after that. The fast blew away the stench of death and destruction that had shrouded the area and in a small way became the start of the journey of the restoration of faith, dependence and a mutually beneficial relationship between the two communities. This was the courage and conviction of Bibi Amtus Salam.

These are the acts worth commemorating. In today’s vitiated atmosphere, these are the stories we need to be reminded of. We must not forget the horrors, but the ones of hope must also be remembered. They are the silver lining on the dark clouds of hate.

The story of Bibi Amtus Salam has been sourced from Mahatma, The Last Phase by Pyarelal Nayyar