India @ 75: no candles for Bilkis, no tears for Indra, no solidarity with Sayema 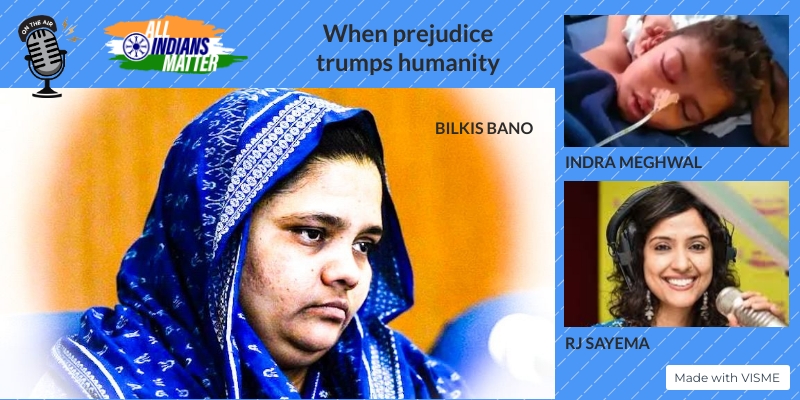 India celebrated 75 years of Independence recently. The occasion was branded as Azadi ka Amrit Mahotsav and expertly marketed. It was a momentous milestone, one to be proud of and celebrated. At the same time, there needs to be introspection about where we have reached and what we have achieved. What have we become? Do we deserve to celebrate? Have we not contaminated the amrit (nectar) of independence with the vish (poison) of nafrat (hate)?

Two incidents that happened around August 15 ruined this Independence Day for me and a third increased my anxiety. Not that they caught me unawares. Just a few days before August 15, we commemorated the 80th anniversary of the Quit India Movement. In 1942, Mahatma Gandhi gave the call, coined by Yusuf Meherally, “Angrezon, Bharat chhodo.” (Englishmen, leave India.)

India has been hurtling headlong into an abyss of orchestrated hate. Hate as a weapon for political gain has been successfully utilised. Citizens of ‘New India’ have enthusiastically adopted hate and intolerance as their creed, much more enthusiastically than pre-Independence Indians had adopted Bapu’s creed of non-violence. At 75, hate poses a grave threat to the idea of India as seen by our founders. But we don’t seem to care.

Hate has turned us into brutes. Not that all of us perform inhuman acts but, when some of us behave in such a ghastly manner, the majority decides to keep quiet, not react, not be bothered. Our inaction and silence embolden the brutes and lend impunity and legitimacy to their actions.

The mix of bigotry and caste

I mentioned two incidents that ruined this Independence Day for me. One happened just two days before August 15. I was horrified to read that a nine-year-old Dalit boy, Indra Meghwal, was beaten to death by his upper caste teacher, Chail Singh, in Saraswati Vidya Mandir School in Surana village in Jalore, Rajasthan. Indra’s crime? He drank water from the pot reserved for upper caste teachers.

What was shocking was that most of us did not shed a tear for the brutal murder of an innocent child. There should have been an outpouring of rage at such a barbarous act done so casually and passed off as caste violence. Where has our humanity, our compassion gone? We are as guilty of murdering young Indra as his demonic teacher. We did not show our anger, we did not shed a tear. We collectively overlooked the murder. Our silence condemns us all.

It is now over a fortnight since the gruesome murder, but our prime minister, Narendra Modi, who has the talent of shedding tears on tap, has nothing to say about Indra. He was too busy with the Har Ghar Tiranga campaign.

I could not celebrate Independence Day. I could not forget Indra. Forgive us, dear Indra.

The other incident that filled me with revulsion did not happen this year. Bilkis Bano was gangraped in 2002 during the pogrom against Muslims in Gujarat. Eleven men from her village attacked her home, murdered her family and then took turns raping Bilkis who was five months pregnant As if that wasn’t enough, they bashed the brains out of her three-year-old daughter. The rapists and murderers were convicted and sentenced to life. Although I oppose capital punishment, their crime should have been seen as the rarest of rare and attracted the maximum prescribed punishment.

The sentence the eventually received should have been for the rest of their natural lives but 14 years later a committee of their sympathisers decided that they had suffered enough. They were not only released, they were welcomed back as saints and feted. All of us silently watched this sickening spectacle. It did not collectively fill us with rage. Justice had eluded Bilkis and her murdered family but it did not bother us. We became part of this macabre miscarriage of justice through our silence.

To compound the crime, an elected representative of the Bharatiya Janata Party, who was part of the committee that decided to free the rapist-killers, justified the act: “All of them were Brahmins, who are sanskari (virtuous) by birth. They do not deserve to be punished anymore.” The initial act was an abortion of justice; this statement turned it into a vicious, bigoted action. Yet it did not enrage our collective conscience. Yes, some of us made polite noises, some ineffectual gestures to register our rage but it was not enough.

A few years ago, in the wake of the gruesome gangrape-murder of Nirbhaya, the nation had risen in revulsion and ensured that the guilty were arrested, tried and sentenced. We collectively ensured that none of them escaped. We even forced the government to change the laws applying to juveniles so that the principal accused did not escape his sentence. It was forcefully established that enough was enough, that we would not accept anything but the severest punishment for the accused.

The crime against Bilkis and her family took place in 2002, but the passage of time makes it no less gruesome than the crime against Nirbhaya. So, why are we silent? It’s because the one who was savagely raped was a Bilkis and her murdered family were Muslims. We have no candles for her, no compassion for her murdered three-year-old daughter, no sympathy for her slaughtered family. Our prime minister has chosen to remain silent not only about the abortion of justice but also on the bigotry voiced by his party’s MLA. They are both birds of a feather, but what about us? What has turned all of us into sub-humans? Why have our hearts turned to stone?

The abuse of nationalism

The last incident that worries me is tame compared to the previous two, but it is an indicator of why we have become so stone-hearted. At the Asia Cup we defeated Pakistan, so the rest of the tournament didn’t seem to matter anymore. Like so many Indians, RJ Sayema posted a message expressing her joy and congratulating the Indian team. It was a normal, euphoric exclamation and should have been applauded. But a vicious purveyor of Sanghi venom, Rishi Bagree, decided that Sayema, being a Muslim, did not have a right to hail an Indian victory over Pakistan. She was not Indian enough for the Sanghi scorpion.

He tweeted a venomous tweet indicating that her community was responsible for the tragedy of Partition and so she had no right to celebrate. A year ago, the PM declared that August 14 would be commemorated as Partition Horrors Remembrance Day and Bagree was doing just that in his bigoted way. We, the right-thinking people, should have loudly condemned his attack but once again we collectively chose to not respond. We refused to stand in solidarity with an Indian Muslim.

Compared to the previous two, this incident may seem trivial but it isn’t. This is how prejudice is instilled, prejudice is what leads to hate and hate eventually kills the humanity in us.

Unfortunately, we have allowed prejudice and hate to eradicate compassion from the collective hearts of our nation. At 75, we have turned into a nation of dead souls.

In 1947, Bapu did not participate in the celebration of freedom. Seventy-five years later, we are forfeiting our right to celebrate it.