India will have 5 crore internal climate refugees by 2050 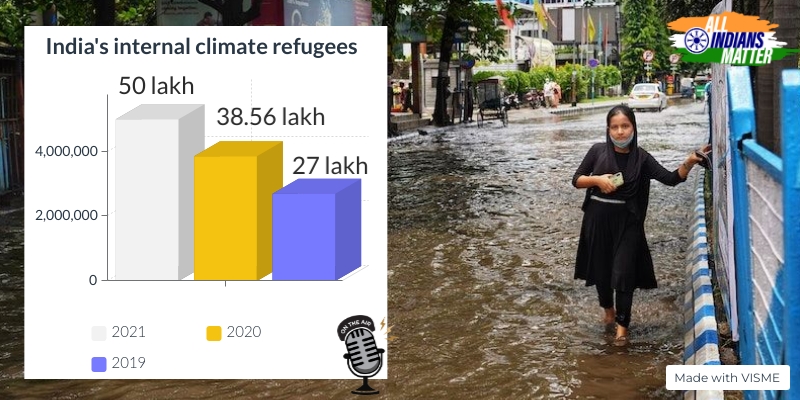 The 2022 United Nations Climate Change Conference or Conference of the Parties of the United Nations Framework Convention on Climate Change – you might know it better as COP 27 – has just ended in Sharm El Sheikh, Egypt. As expected, advanced countries focused on developing nations phasing out fossil fuels and transitioning to renewable energy and tensions between the two groups over who should bear the cost of reversing global warming were on full display. It’s the poorer countries that bear the brunt of climate impact, and no form of it is as stark as internal climate refugees – those displaced and forced to migrate within their own countries due to extreme weather events, such as floods, landslides, droughts and forest fires. All of this is on the rise in India, which is highly vulnerable to climate change, with 80% of the population living in districts that are at risk of extreme hydro-met disasters. It is estimated that India will have 5 crore internal climate refugees by 2050. According to the United Nations High Commissioner for Refugees, or UNHCR, close to 50 lakh Indians were displaced in 2021 due to climate change and natural disasters. Is India cognisant of its internal climate refugees and what is it doing for them?

The UNHCR’s annual Global Trends Report said there were 2.37 crore new internal displacements across the world due to disasters last year. India, as I said, accounted for 50 lakh, the third highest in the world after China at 60 lakh and the Philippines at 57 lakh.

According to the Internal Displacement Monitoring Centre, in 2020, 38.56 lakh people were displaced by environmental disasters in India. This was 989 times more than the 3,900 persons displaced by conflicts. In contrast, the number of Indians displaced due to disasters in 2019 was 27 lakh.

But what are internal climate refugees, who are known by many terms such as ‘environmental migrants’, ‘climate change-induced migrants’ and ‘environmentally displaced people’? First of all, climate refugees are not migrants. Migrants shift to other areas for better livelihoods or socio-cultural or political reasons and they have the option of returning. A refugee, on the other hand, is forced to move due to certain circumstances, such as war, and returning to their place of origin is nearly impossible. So, climate refugees are forced to move due to events like salination, sea-level rise, extreme heatwaves and desertification. Here, too, there are long-lasting impacts, such as loss of livelihood, food and water. In most cases, a return home is next to impossible.

A 2021 study by the Council for Energy, Environment and Water found that more than 74% of India’s districts are vulnerable to extreme climate events, with 27 states and union territories being affected. Assam, Andhra Pradesh, Maharashtra, Karnataka and Bihar are the five most vulnerable to droughts, floods and cyclones. Meanwhile, an Intergovernmental Panel on Climate Change said that Odisha, Assam, Meghalaya, Tripura, West Bengal, Bihar, Jharkhand, Chhattisgarh, Uttar Pradesh, Haryana and Punjab will be most severely affected due to global warming. If emissions continue rising, all states will have areas that experience temperatures of 30 degrees Celsius or more, the report said.

Usually, those displaced by climate migrate within their countries and many nations have laws that offer them protection and welfare, terming them as ‘internally displaced’. However, the absence of a uniform policy for the internally displaced or the lack of its application breeds ignorance about this forced movement.

Internationally, this is better understood. For example, the UN Global Compact on Migration (2018) offers a blueprint, advocating “more predictable and equitable responsibility-sharing, recognising that a sustainable solution to refugee situations cannot be achieved without international cooperation”. However, this is too vague and non-binding.

Another factor going against awareness about climate refugees is that their migration is not always driven by extreme events like storms and floods that get a lot of news coverage. Often, it’s slow-onset events like sea-level rise or saline water intruding into agricultural land that forces them to leave their homes.

The last is particularly true of India, where uncertain weather patterns, such as deviations in rainfall and temperatures, have made many regions unsuitable for agriculture. No wonder the Global Climate Risk Index 2021 includes India in the top 10 countries most affected by climate change. This has led to migration to urban areas and the COVID-19 pandemic added to that pressure. Obviously, the quality of life of these migrants is abysmal. Our cities aren’t known for their infrastructure or population management, especially on the health front, and these refugees are often the worst off. They end up competing for the same jobs, usually unskilled and underpaid, at construction sites. This population gathers on the marginalised areas of cities in congested slums, leaving them vulnerable to disease and with little access to education or social progress.

Let’s take a look at the long tail of the impact of climate change on the poor. Agrarian communities may be forced to take loans to buy seeds or fertilisers. But poor yields would leave them servicing crippling debt for the rest of their lives. Similarly,  fishermen take loans for boats and nets. But falling fish catches mean they never make enough to pay back those debts, destroying them financially.

What’s ironic is that these poor people are the least responsible for climate change and any impact on them escalates pre-existing social inequalities.

It’s a substantial challenge and the first thing India needs to do is fill the missing data gap — we need adequate, accurate records of climate refugees across states. I’m referring to occupation, income level, basic services needed… This will shape policies and guide budgetary allocations. State and local governments must put in place mechanisms to provide accommodation, healthcare and nutrition to the refugees while ensuring sustainable livelihoods for them.

Here’s how urgent the need is: India’s first climate change assessment report, published in 2020, said temperatures would rise 4.4 degrees Celsius by the end of this century in a “business as usual” scenario. The frequency of heatwaves will rise up to four times, cyclone intensity will increase and sea levels will rise 12 inches if action is not taken.

Even if mitigation measures are undertaken, the number of climate refugees will increase – at least for a while. So, we need social programmes that incorporate extreme weather. The Mahatma Gandhi National Rural Employment Guarantee Scheme, or MNREGA, is often cited as a possible social security solution. It guarantees 100 days of work per year to every household but this government isn’t invested in it. As a result, there are withheld or delayed payments and work is not always provided. This makes it an unviable safety net.

So, policymakers must integrate resilience into the agriculture system, make our cities less vulnerable to population explosions and they must plan to finance rehabilitation and reconstruction efforts after climate-induced turmoil.

Unfortunately, administrative lethargy and the lack of awareness is worsening the suffering of climate refugees. This is unjust to them. As I said, they are least responsible for the crisis they find themselves in and urgent action must be taken to sustain them.

BY admin‘Social justice is entwined with the climate conversation’
‘Many reasons for the Great Resignation, from self-exploration to boredom and FOMO’admin16/11/202216/11/2022 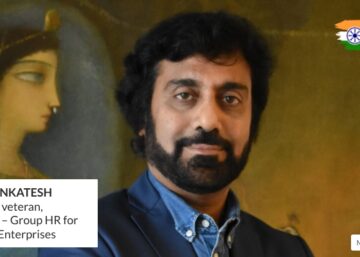 BY admin‘Many reasons for the Great Resignation, from self-exploration to boredom and FOMO’
Twitter Feeds