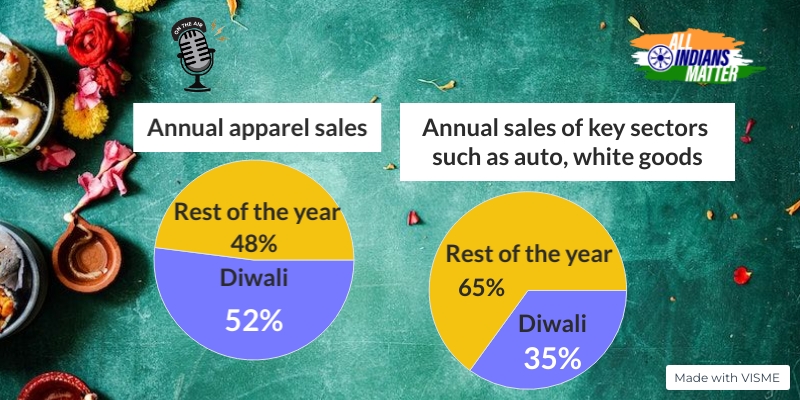 We’re just coming out of the festive season, with Christmas still to go. As always, it’s been a time to spend for consumers and for businesses to cash in. It’s the biggest annual boost to the Indian economy. By all accounts, the festive season has been a bright spot in an otherwise dismal economic landscape this year. It was reported that online marketplaces clocked a rise of 27% in sales, hitting the $5.7 billion mark between September 22 and 30. Automobile sales jumped 57% over the same period last year during Navratri, according to the Federation of Automobile Dealers Associations. Two-wheelers sales grew 3.7% from 2019 levels, while cars and SUV sales jumped 92% in September from a year earlier, according to the Society of Indian Automobile Manufacturers. India is a nation of great cultural diversity, celebrating at least 51 festivals a year – of which 17 are nationally recognised. These festivals are a vital part of the overall economy, accounting for a large portion of the sales of especially consumer goods, and have a huge role in keeping consumption and employment going in tough times like these. Let’s take a look at India’s festival economy.

There is little doubt that the festival economy is the engine of the overall Indian economy. According to industry association ASSOCHAM, Ganesh Chaturthi generates well over Rs 20,000 crore in business across 10 days with a 20% compounded annual growth rate, especially in Maharashtra and Telangana. Hyderabad alone generates Rs 5,000 crore in business during Ganesh Chaturthi and provides employment to more than 20,000 families during the peak season as well as the year round.

Durga Puja, meanwhile, contributes Rs 40,000 crore in business with a CAGR of 35%, majorly from West Bengal. This spans the gamut, from pandal making and decorations to food and events.

The unorganised economy, from low-skilled workers to micro entrepreneurs, in particular benefits through large-scale employment.

The kite festival, Uttarayan, generates more than Rs 500 crore of business, most of it in Gujarat. There, it provides employment to about 6,000 families.

Diwali, of course, is the big one with consumer appliances, electronics, cars and clothes making the most of it. In fact, 52% of annual apparel sales happen during this time and each individual spends 20% more than their monthly average on celebrations. It’s unquestionably the strongest economic stimulus in India, benefiting everyone, from the neighbourhood grocery store to the halwai around the corner and the food stalls that dot markets.

On average, key sectors such as automobiles and white goods register 35% of their annual sales across Diwali and the festival season. So, you usually have a flurry of new launches and discounts.

The downer has been the influx of cheap Chinese products, a market of about $72 billion that covers fireworks, toys, lights, appliances, you name it. They are cheaper and, therefore, many consumers prefer them to local products. They are a threat to Indian small and micro enterprises and, according to an ASSOCHAM survey a few years ago, 8 to 10 lakh jobs are lost due to Chinese products during Holi. Roughly 75% of colours and a huge share of plastic products such as water guns come from China. According to the Tamil Nadu Fireworks and Amorces Manufacturers Association, 40% of the Rs 10,000-crore fireworks business has been captured by Chinese products, affecting 2.5 lakh Indian artisans. Even Ganesha idols made in China are flooding India and affecting idol manufacturers.

Indian policymakers will have to figure out a way to protect Indian businesses from this onslaught.

Let’s switch gears now to take a look at how festivals affect the rural economy specifically.

The artisan industry is the second largest employer in developing nations after agriculture and also employs women in large numbers. It’s an unorganised sector, so artisans deal with low capital, poor marketing, no access to modern technology and so on. It’s the festival season that sustains them through the year. Ganesh Chaturthi and Diwali are prime earning season for them.

Many artisans are now finding ways to market their products online. Some states have signed MoUs with companies like Amazon for this. And companies like Amazon are happy to promote such sellers anyway. For instance, in its ‘Great Indian Sellers’ campaign, Amazon featured those selling lights, brasswork, sarees and others, urging customers to buy from them.

There are several online marketplaces dedicated solely to artisanal products made in rural India. Typically, these marketplaces cut out the middlemen, thus ensuring that the artisans get the full benefit of their skill and labour.

A word on the environmentally conscious consumer during the festive season. Young buyers, especially, want to ensure that their consumerism has a minimal effect on the planet. So, plastic and non-biodegradable products are out. Earthen lamps, clay jewellery and ‘sow-and-grow’ statues are in. This, too, has boosted artisans’ incomes because these consumers are willing to pay a premium for sustainable products.

The festive season also sees more rural tourism. For instance, the popular Ashtavinayaka tour of eight Ganesha temples sees a rise in the number of devotees. This has led to more hotels and other facilities in remote areas of Maharashtra. There is a growth of rural tourism in West Bengal during Durga Puja season too.

As you can tell, festivals are vital for the economy, often spurring consumers to override the prevailing economic sentiment. They are great, especially for small producers. This is an opportunity, especially when the wider economy is being buffeted by mismanagement, inflation, widespread unemployment and slowing growth.

Other than their religious and cultural significance, our festivals are giving us another reason to cheer.