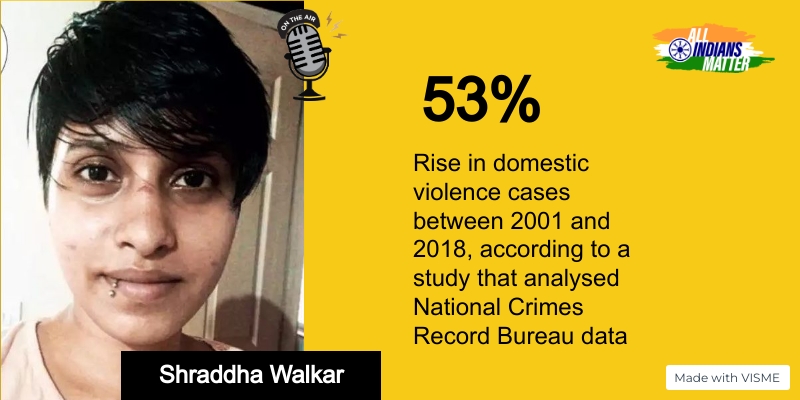 The gruesome murder of Shraddha Walkar by her live-in partner Aftab Poonawalla has justifiably shocked the nation. Aftab chopped Shraddha’s body into 35 pieces and disposed of them across Delhi, storing her remains in a refrigerator at one point. While the murder itself is disturbing, what’s equally shocking is the reaction to it – from the media as well as what we’re seeing on social platforms and in offline conversations. The reactions have ranged from victim-blaming to Islamophobia and insensitive memes about the murder to completely over the top news coverage. Why are we so blind to the real issues: the violence against women that is so endemic in our society, what domestic abuse victims go through at the physical and emotional levels, and our shameful patriarchy and misogyny that is so evident in our response to such cases?

Why do the media think it makes more sense to broadcast every gory detail of the murder on loop instead of speaking to psychiatrists about the trauma? Surely, the question of why an abuse victim is unable to leave her abuser is a very relevant question – among many others that the case throws up. Instead, we have a long line of people asking why Shraddha simply didn’t leave Aftab.

A minister, who should have known better, was among the worst offenders. Union Minister Kaushal Kishore Kumar said that Shraddha was responsible for her own murder, adding that educated girls should learn from uneducated girls and live with only those their parents approve of. What that sounds like is that empowering girls to take independent decisions is a bad idea. The insensitivity and insulting underlay of the comment to all women took my breath away – and not in a good way.

Here’s a fact: an abuse victim is often unable to share what they are experiencing or feeling. They are trapped in a vortex of abuse, afraid to lose the person they love and prefer instead to change their own behaviour to please their abuser. They think this will turn the abuser into a loving person again. This may seem illogical to those not suffering from trauma but the victims don’t act rationally precisely because they are disturbed. This lack of logic becomes an excuse for insensitive persons to blame the victim and indulge in moral policing.

Conservative sections use such cases to reinforce their patriarchy, hating especially upon women who exercise their freedom. It’s worth pointing out to them that it’s not freedom that is the problem but the malfunctioning moral compass of a society that refuses to act upon male violence and the lack of safety for our women.

All this has played out in the Shraddha Walkar murder, allowing her even less dignity in death than there was in life.

What have we as a society done to curb this male violence? Domestic violence is disturbingly common in India. A study that analysed National Crimes Record Bureau data showed that domestic violence cases rose 53% between 2001 and 2018. But there is little support for the victims, with police often turning them away saying it’s a “personal matter” and should be dealt with by the families concerned. Relatives and friends advise victims not to “rock the boat” and instead “adjust” and “compromise”. They, too, often blame the victim, saying she must have done something to anger the man. At other times, they choose not to get involved because they see it as meddling or too messy to deal with. I’ve also heard of women’s families justifying the violence, saying the man only hits the woman because he loves her.

What the Shraddha Walkar murder should do is shine the spotlight firmly on gender violence in India. As family, friends and empaths, we should be more aware of what the victims need. They need counselling and support as they try to break away from the abuser. Parents must support the women, casting off the chains of societal disapproval to create a safe place in their homes.

The conversations on social media about the murder were degrading, to say the least. I was ashamed to see jokes as well as memes about the murder. There were memes about what you store in a fridge and Islamophobic jokes, which dehumanised Shraddha and shifted attention away from the crime.

The ‘fridge memes’ depicted men standing next to a refrigerator and saying they store only vegetables in it, not “meat”. There was even a Facebook group called ‘Aftab Poonawalla Fridge Posting’ that joked about necrophilia, rape and cannibalism.

These memes suck away our ability to understand the seriousness of the issue. None of the people posting them care about the psychological impact of their posts. All they care about is views, likes and shares. They’re milking a young woman’s abuse and murder to divert attention to themselves.

Then, of course, there’s the Islamophobia that seems to worm its way into every issue. The memes were predictably posted with hashtags like ‘LoveJihad’ and ‘MeraAbdulAisaNahiHai’.

These memes are highly offensive and come at a time when inter-religious relationships and marriages are being branded as ‘love jihad’ by Hindu supremacist groups and even state governments led by the Bharatiya Janata Party.

The opposition to such relationships is what has prompted many to say that Shraddha deserved to be murdered because she chose to live with a Muslim.

Such conversations ultimately provide the foundation for divisive governments to frame laws that make inter-faith relationships very difficult or even impossible. This is part of their wider agenda of discriminating against minorities.

There are heinous crimes committed by non-Muslims, too, but these are not turned into memes and they don’t lead to hate speech. The fact is religion has nothing to do with criminal depravity.

Many anchors too faulted Shraddha for making independent choices and berated her for choosing her partner over her parents. Others referred to Aftab’s call logs to show that he was in touch with other Hindu girls and imply that he was luring them to fulfil his love jihad “mission”. One anchor absurdly linked Aftab’s training as a chef to his chopping up Shraddha’s body.

The insinuation that Shraddha dug her own grave by using a dating app, making choices independent of her family and choosing a partner from outside her religion was loud and clear throughout.