The duality of the monsoon and how it affects you 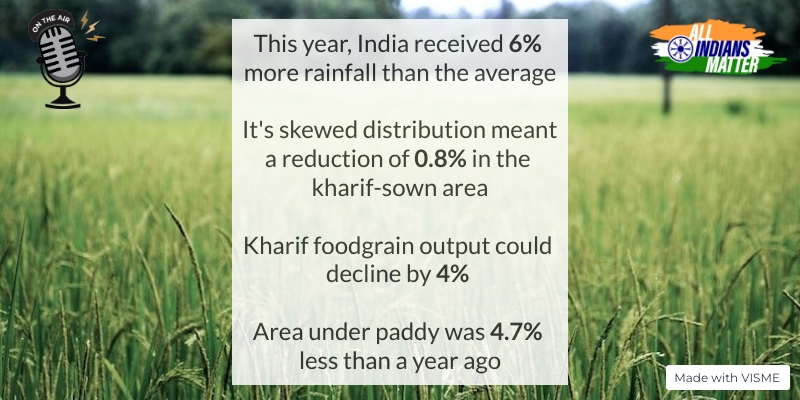 The Indian monsoon has officially ended, with the country recording “above normal” rainfall – 6% more than the long-term average. So why then are we seeing drought-like conditions in some states and a drop in agriculture output in others? This is because the monsoon had a skewed distribution in the crucial July-August period, resulting in significant rain deficits in the northern Gangetic plain. This resulted in a roughly 1% decrease in overall acreage of the kharif, or summer, crop compared to last year. Drought conditions in at least six states reduced the crop acreage there too. These states included crucial agricultural ones such as Uttar Pradesh, Bihar and Jharkhand. The overall acreage was down by close to 5% in paddy areas and there was a decrease in pulse and oilseed sowing too. In a time of unchecked inflation, a fall in output isn’t good news. It would mean that soaring food prices would rise further and that farm incomes would drop, adding to the already crippling and widespread rural distress.

India is not a well-irrigated country, so the monsoon is critical for food output and security. It is said that 68% of India’s crop area is rainfed and, of the 40 million hectares of rice farms, only 60% are irrigated.

The monsoon accounts for 75% of India’s annual rainfall and is vital for farmers. However, it’s uneven distribution this year has impacted paddy, coarse cereals, pulses, oilseeds, cotton and soyabean production. September-end data shows that the kharif-sown area was 0.8% less than a year ago at 110.2 million hectares. The decrease was greater for paddy due to rain deficits, as I said earlier, in Uttar Pradesh, Bihar, Jharkhand and West Bengal.

Conversely, the surplus rain in September delayed paddy harvesting in the north but added to the sown acreage in the south in Karnataka, Telangana and Tamil Nadu. Overall, the area under paddy was 4.7% less than a year ago, at 40.2 million hectares. This means that India’s rice production — 104.99 million tons — is expected to shrink by 6% from a year ago, according to an estimate by the agriculture ministry.

Overall kharif foodgrain output is estimated to decline by 4% to 149.2 million tons.

The good news is that the surplus rain has ensured sufficient moisture for the rabi or winter sowing season. This is because the lingering monsoon keeps the soil moist and tops up reservoirs.

Agriculture is important because it supports half of India’s population and accounts for 15% of the economy. The potential double whammy comes in the form of the October rain, which could damage crops such as rice, pulses, cotton and soyabean. It may also delay wheat planting.

You’ve already experienced the result of the fall in output in the form of higher prices and the government could be forced to limit or ban food exports, just as it did with wheat after promising to supply the world in the summer.

This isn’t the first erratic monsoon; India has been witnessing them for the past few years, and that’s raising concerns about agricultural output and food security. The most prominent feature of the erratic monsoon is the rising intensity of rain at the end of the season and that the end is prolonged.

Scientists have long warned about the impact of climate change, especially extreme weather events, on food output. So, the unirrigated regions, such as the east, are particularly vulnerable.

There are, of course, other pressures on farmers. The crop damage has been accompanied by lumpy skin disease, which has spread across 15 states, killed a lakh of cattle and affected another 20 lakh.

The additional burden has come in the form of rising fodder prices.

So, what are the solutions? Scientists believe that India needs to reimagine its agricultural practices. The change in rain patterns, droughts and extreme heat should make India switch from mono- to multi-cropping systems. Mono-cropping is planting the same crop in the field through all the growing seasons. Multi-cropping is growing two or more crops on the land during the year.

Monoculture tends to kill the nutrients in the soil, inhibiting healthy crops.

With climate change expected to intensify, India must create adequate demand and supply of indigenous grains, vegetables and fruits. It’s more sustainable and less risky. A supply chain that enables consumers to buy directly from farmers would cut out rapacious middlemen, raise farm income and lower food prices drastically. There is also a need to move to sustainable methods of rice cultivation to improve water use and make farmers more adaptable to the changing weather. Unfortunately, there doesn’t seem to be any urgency on the part of the government on these fronts.

India also needs to improve weather forecasting. You could argue that weather predictions have improved over the years, but location-level accuracy is not great. Recently, the Indian Meteorological Department admitted that it failed to accurately forecast the extent of deficiency in key rice-growing areas in Uttar Pradesh, Bihar, Jharkhand and West Bengal.

Fixing Indian agriculture and factoring in the weather is, of course, a complex task but it’s a no-brainer that there should be a shift in cropping patterns away from water-intensive crops like paddy. This should be complemented by a strengthening of the procurement policy and boosting farmer incomes through crop diversification, from staple cereals to high-value crops.

Last, and perhaps most important, India needs to build more irrigation facilities to ensure farmers are not held hostage by the erratic monsoon. The urgency can’t be emphasised enough.