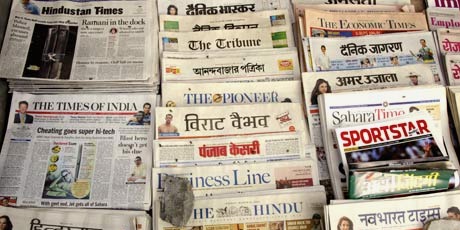 The recent lawsuit against Cisco Systems – accusing high-caste Indian-American managers of denying a Dalit professional opportunities, raises and promotions – made me think about my time in newsrooms. Over the course of a 17-year journalism career, it struck me, I couldn’t think of more than one Dalit colleague. There must have been more but, like in many other professions, did they hide their caste fearing discrimination or ostracisation?

While it’s understood that media ownership and newsrooms are dominated by the upper castes, it’s not something I ever thought about. It’s so much an accepted reality that nobody thinks of it as abnormal.

To understand it better, I spoke to Camil Parkhe, my former colleague at the now-defunct ‘Maharashtra Herald’ (later renamed as ‘Sakal Times’). A Dalit Christian, Parkhe is a 40-year veteran of journalism and has authored the book ‘Dalit Christians: Right To Reservation’. As an eyewitness to the evolution of the Indian media, he said newsrooms are but a microcosm of society.

Parkhe, someone I deeply respect, told me upper castes dominated leadership positions across all newsrooms when he started out. “Forget Dalits, even the so-called middle-castes like Marathas were rare. It’s the upper castes who had access to education and their social privilege ensured it was they who climbed the ladder,” he said.

As in other industries, there was a deliberate effort to keep out lower castes. “I have seen it happen in many newsrooms, even in urban areas and in top newspapers,” Parkhe asserted. 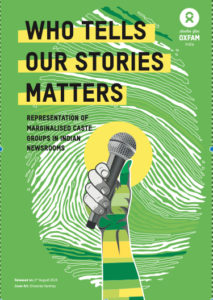 The Oxfam-Newslaundry report points out that there are virtually no Dalits among newsroom leaders.

Little seems to have changed over the decades. A study released in August 2019 by Oxfam and Newslaundry said media organisations, dominated by upper castes, have failed miserably to diversify their newsrooms. This, in turn, has impacted the diversity of their news coverage.

As veteran journalist Abhay Mokashi, who has been writing about political and social issues for more than 40 years, said: “There is an upper-caste mentality in newsrooms. If you view the world through that lens, that is what will reflect in the newspaper.” As an example, he cited the Campa Cola Compound case. “When a posh apartment complex in an affluent area faces demolition, it becomes big news. However, when Dalit slums are demolished, there is little mention of it,” he said.

The Oxfam-Newslaundry report, ‘Who Tells Our Stories Matters: Representation Of Marginalised Caste Groups In Indian Newsrooms’, pointed out that marginalised groups are all but absent in news media – particularly in leadership positions that determine editorial stances and what to cover. In fact, it’s the upper castes who write the stories of those affected by discrimination. The media is failing Dalits, Adivasis and other marginalised groups.

The report uses surveys, byline counts and triangulation with publicly available government sources to identify the castes of journalists, anchors, writers, editors and TV panelists. Six English and seven Hindi newspapers, flagship debate shows on 14 TV channels, 11 digital news outlets and 12 magazines were examined between October 2018 and March 2019. More than 65,000 articles and news debates were analysed to paint a picture of who gets to speak on various subjects and to what extent.

The findings were stunning:

As Parkhe said: “In some channels, there is an unwritten rule that you won’t be taken unless you’re upper caste.”

These numbers are indicative only in part of what happens inside newsrooms. Some have written about Dalits being asked why they write about caste issues, and their reports being dropped or underplayed. Shockingly, some have even been accused of casteism.

Parkhe echoed this: “Normally, the Dalit is ostracised in a newsroom, though not always overtly. It’s usually subtle. That’s why many of them try to hide their caste identity.”

Lower-caste journalists, often sidelined and with not many others from their own social group in newsrooms, struggle to find mentors.

Is there a commercial angle too for the prejudice? Mokashi thought so: “There is a perception that if you write about Dalit issues and such matters, you will not get advertising.” 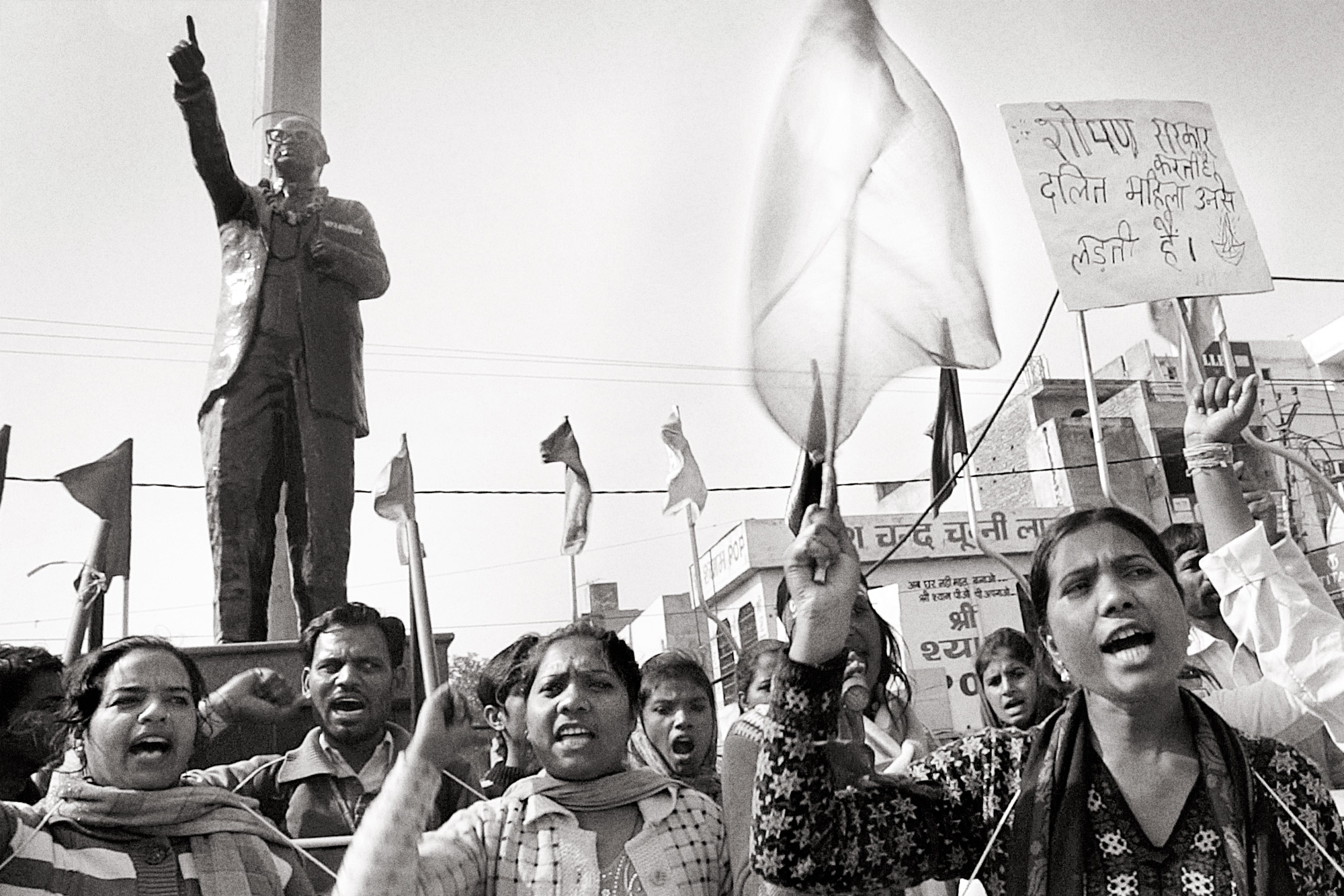 The skew in the newsrooms shows in their coverage of lower-caste and tribal issues.

Another form of untouchability

Lopsided newsrooms, not surprisingly, are displaying skewed news coverage patterns – the Oxfam-Newslaundry study showed that only one English newspaper accounted for over half the share of coverage on caste issues.

You could argue that this too is a form of untouchability.

What emerges is a picture of upper-caste dominance of media ownership and leadership over generations. Their entrenched attitudes and the stigma they associate with the lower castes are reflected in appointments and issues they focus on.

Parkhe recalls that ‘Sakal’, the leading Marathi daily founded in 1932, had a string of upper-caste editors. The newspaper was taken over in 1985 by Pratap Pawar – younger brother of Sharad Pawar, the doyen of Maharashtra politics – and it was he who broke the chain by appointing highly-respected journalist and author Uttam Kamble, a Dalit, as chief editor.

This incident is one of the few bright spots in the Indian media’s not-so-glorious caste history.

The ‘Kesari’ refused to publish an advertisement of Dr BR Ambedkar’s ‘Mooknayak’ newspaper even though it would have been paid for the space.

The discrimination was visible even before Independence. Kesari, for example, refused to publish an advertisement about Dr BR Ambedkar’s newspaper ‘Mooknayak’.

Among the recent examples is the IndiaSpend report in June 2019 on the Dalit community’s battles for land promised to them, a movement initiated in 1941 by Dr Ambedkar. In 2019, the struggle was intense. Spread across 13 states, IndiaSpend reported 31 conflicts involving 92,000 Dalits. However, this doesn’t seem to have been picked up much by the rest of the media.

While atrocities or discrimination find space and airtime, they are usually reported as individual cases. Investigations and debates focusing on the deep-rooted caste consciousness in Indian society are rare. 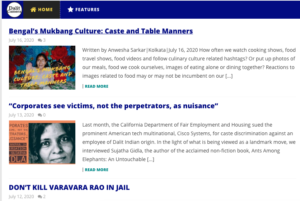 Dalit Camera is just one example of how marginalised groups are using digital platforms to be heard.

At a broader level, these failures and biases don’t augur well for Indian democracy – already under threat from religious extremism and assaults on the Constitution. Surely, media should be a mirror of – and must hold one to – society. How do you achieve this without inclusive newsrooms?

Since we aren’t there yet, the marginalised are taking the digital route to focus on their issues. These include the likes of Dalit Camera, Round Table India, Velivada and Adivasi Resurgence. Many of these are also on YouTube, Facebook and Twitter and have thousands of subscribers.

However, lacking the financial muscle and acceptance of mainstream media, their reach is largely confined to Dalits.

So, what’s the way ahead? The Oxfam-Newslaundry report suggested affirmative action. If newsrooms are to be diversified, it argued, they will need systems to boost inclusion in the form of training and hiring across the social spectrum.

However, this is unlikely to work without a broader societal transformation. “Newsrooms are not detached from society. You see in them what you see in the world outside,” said Parkhe. What he suggested instead is a different form of affirmative action. “There are many people who do not think of caste, religion or such matters when leading newsrooms. Unfortunately, they do not think of stepping up to spark large-scale change across organisations or society. If such people don a more activist mantle, we will see real change.”

Mokashi, who has also been teaching journalism for 25 years, suggested a relook at the curricula of media schools. “Students are rarely exposed to caste issues and conflicts. In my experience, when they are made aware of them, they take notice. They want to know more and do something about it,” he said.

Whatever the solution, there is little doubt it will be long drawn out. Meanwhile, there is a more immediate need to tell better the stories of Dalits and other marginalised groups. Accepting that there’s a problem would be a good start.