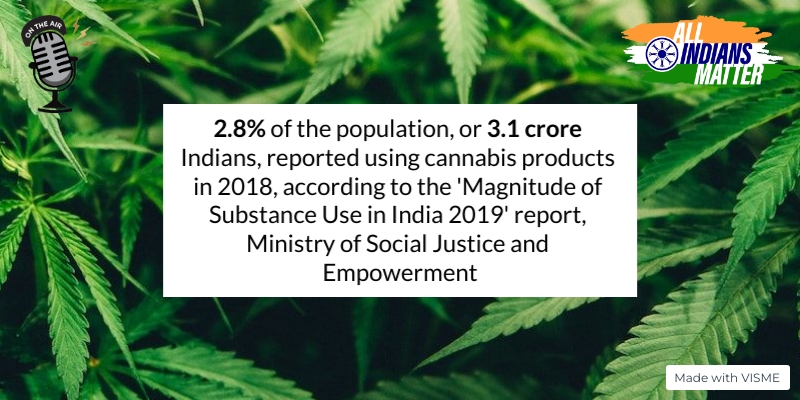 When US President Joe Biden recently pardoned thousands of Americans convicted of possessing marijuana, it was hailed as a positive move and re-energised the demand to legalise its use. In fact, it was seen as the first step towards its legalisation under US federal law. In India, too, there has been a longstanding demand to legalise marijuana for recreational use. It’s not as if the law is stopping anyone either. A report by the Union Ministry of Social Justice and Empowerment in 2019 said that 2.8% of the population, or 3.1 crore Indians, reported using cannabis products in 2018. In everyday parlance, cannabis and marijuana are often used interchangeably. Cannabis describes products made from the cannabis plant while marijuana refers to products made specifically from the dried flowers, leaves, stems and seeds of the plant. Anyway, coming back to the study, about 2%, or 2.2 crore Indians, used bhaang and about 1.2%, that’s 1.3 crore Indians, used other cannabis products. As of now, the consumption of cannabis, better known as ganja, and its resin, charas, is a punishable offence. It has been so since 1985 after the Narcotic Drugs and Psychotropic Substances, or NDPS, Act, came into force. But shouldn’t marijuana/cannabis be legalised in India? It isn’t a narcotic like, say, cocaine and several countries have legalised it. There are several good arguments to legalise marijuana for recreational use and several bad ones to not do so.

It must be noted that the Central Government has made it clear that there is no blanket ban on cannabis. In January, it told the Delhi High Court that the medical and scientific use of cannabis is allowed by law. An affidavit filed by the Director, Narcotics Control, Department of Revenue, Ministry of Finance, said: “There is no complete ban on cannabis under the NDPS Act but can be used for medical, scientific, industrial, horticultural purposes by taking requisite permissions from respective state governments.”

The intent behind criminalising cannabis and, therefore, marijuana was to restrict access to the drug. But, as the report I mentioned earlier shows, it is widely consumed, second only to alcohol. All criminalisation has achieved is the emergence of black markets that are obviously not regulated and which serve as money-spinners for corrupt policemen who are bribed by dealers to look the other way. There are serious risks associated with marijuana sold this way in the form of adulteration with sedatives such as benzodiazepine that cause addiction.

Other than that, criminalisation puts immense pressure on an over-burdened police force and judiciary. Take away the legal definition and it doesn’t merit criminal proceedings the way cocaine or heroin consumption and dealing does. Ultimately, it’s only the poor and marginalised who get caught and punished. Street and slum dwellers, and daily wage workers, consume cannabis for relief from the hell that is their lives, get caught and have no access to legal aid or money to pay fines. The rich, meanwhile, go scot-free.

Let’s take a look a closer look at the law. Section 8 of the NDPS Act prohibits the cultivation of any cannabis plant for reasons other than medical and scientific. However, Sections 10 and 14 grant state governments discretion in regulating cultivation, manufacture and possession. Section 20 (b) prescribes the punishments:

It’s these provisions that were invoked in the arrest of actor Shah Rukh Khan’s son, Aryan.

By the way, there are contradictions within the NDPS Act. It prohibits the sale and use of cannabis resin and flowers, but permits the use of its seeds, stems and leaves. So, bhaang is legal for all practical purposes, while ganja and charas are not. It simply makes no sense.

Whatever stuck-up logic may have sanctioned the criminalisation of cannabis, the fact is that cultural norms have changed. The punishments seem disproportionate for the use of small quantities and several petitions have been filed seeking its decriminalisation.

The matter reached Parliament too. Dharamvir Gandhi, when he was an Aam Aadmi Party MP, had tabled a Bill to effectively legalise the recreational use of cannabis. He pointed out that 80% of those languishing in jail for offences under the NDPS Act were petty drug users, not criminals. His Bill made the distinction between ‘soft’ and ‘hard’ drugs. It doesn’t make sense to club all drugs together as ‘psychotropic substances’ and so the Bill also sought to authorise and monitor the sale of soft drugs.

India has a lot to learn from Western countries that have decriminalised recreational use of cannabis. Take Portugal, for example. In 2001, it became the first country to decriminalise the possession and consumption of all illicit substances. Instead of arrest, support services were provided to those using drugs. This led to a fall in the use of all drugs other than marijuana. New cases of HIV among drug users fell significantly. Overdose deaths plummeted by more than 80%.

It’s no wonder that Canada, Mexico, South Africa, Uruguay, Georgia, the Australian capital region, and 18 states of the US have legalised recreational use of the plant.

It makes complete sense to view cannabis through a regulatory lens rather than a punitive one. So, the question to ask is: can we legalise cannabis and tax it? Here’s this for perspective: India earned Rs 1.75 lakh crore in 2019-20 by taxing alcohol. Taxes on tobacco products already net the exchequer Rs 53,000 crore a year. These are tremendously addictive products and also have potentially harmful effects but they aren’t banned. Each government regulates them and tries to make them tough for people to buy by raising taxes on them.

There is, of course, the medical aspect too. The World Health Organisation says that the therapeutic effects of cannabidiol, a compound of cannabis, include nausea relief in advanced stages of serious illnesses such as cancer and AIDS. There are other therapeutic uses of cannabinoids demonstrated in controlled studies, such as treatment of asthma and glaucoma, and as an antidepressant, appetite stimulant and anti-spasmodic.

The case to decriminalise cannabis gets stronger – it will reduce pressure on the criminal justice system and we can use the savings to improve rehabilitation and support systems. This is a sensible public health approach that will also encourage those that use cannabis for more than recreation to seek help without fear of conviction.

Its legalisation for recreation will wipe out the black market and swell the tax kitty. A study has shown that Delhi and Mumbai alone could raise roughly $170 million in taxes on the purchase of cannabis. That’s Rs 14,000 crore.

It’s a question of getting the policy right. So, you could have a maximum threshold for cannabis consumption per week or require registration and put in place an age limit, the way we have for alcohol consumption.

It’s important for us, as a society, to outgrow outdated taboos and have a serious, mature debate around the sensible consumption of cannabis and marijuana, focusing on sound policy rather than criminalisation.