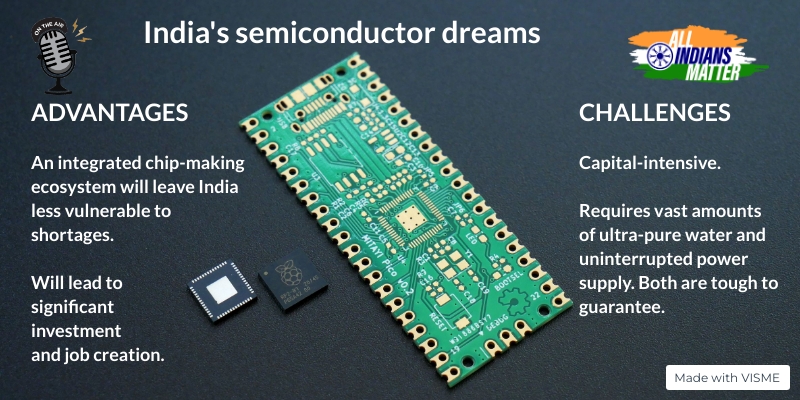 There was a furore when the Anil Agarwal-led Vedanta’s joint venture with Foxconn chose Gujarat over Maharashtra to set up a semiconductor plant. The controversy was indicative not just of the race between states to acquire investment but also how important it is for India to become global semiconductor hub. India wants to attract electronics ecosystem players from across the world, from manufacturers of highly sophisticated and sensitive equipment to material and equipment providers. But why does it want to become the centre of semiconductor manufacturing? It’s because the chips, or the integrated circuits imprinted on silicon wafers, are needed for every industry you can think of, from automobiles to laptops and from defence to home appliances. In a world that needs ever more computing power and one in which artificial intelligence will play a central role, you can’t have enough such manufacturing capacity. India’s ambition to tap the chip-manufacturing gold rush is altering its industrial policy because the handful of companies that dominate this space will invest only in countries that are fully on board. That’s because the stakes are sky-high – investments run into billions of dollars that fund cutting-edge research and futuristic production facilities. So, every government is throwing cash and incentives at such companies. The US, for instance, is offering incentives worth $52 billion. The European Union is adding $30 billion worth of fresh incentives to its earlier offer. China has $15 billion of subsidies in place. Not to be left behind, India has announced a $10 billion incentive programme for semiconductor and display manufacturers. Why is this industry so crucial to India’s long-term economic objectives? And what are the challenges that it faces?

First of all, what are semiconductors? They are the thumbnail-sized worker ants of virtually every electronic device and machine, from smartphones to cars. They impart computational power to these devices. The global semiconductor industry is valued at $500-$600 billion and supplies the electronics industry valued at $3 trillion.

The basic component of a semiconductor is a wafer of silicon etched with billions of microscopic transistors and projected to specific minerals and gases, which form patterns to control the flow of electric current while following different computational instructions. The semiconductor technology nodes available are 3 nanometre and 5 nanometre. The ones having higher nanometre value are used in automobiles, consumer electronics, etc, while the lower ones are meant for devices such as smartphones and laptops.

Among the problems triggered by the COVID-19 pandemic was a global shortage of semiconductor chips – and that’s what sparked India’s ambition to become a hub for their manufacture.

The thing is it’s not like any other industry. Chip manufacturing needs a very complex ecosystem – specialised tools, which is Japan’s area of expertise; photolithography equipment that prints circuits on silicon wafers, a Dutch speciality; and raw materials needed for the finished product, such as neon gas and palladium, which are mainly supplied by Russia and Ukraine. You can guess how challenging the last are to acquire, given the conflict between the two countries.

While China has moved quickly to procure rare earths and minerals, India’s is offering a broader, incentive-based push into wider electronics manufacturing. While it has tasted success in mobile handset manufacturing, making display units for laptops, for instance, is another kettle of fish.

The good news is that India is not unfamiliar to this space – it already designs advanced chips that are then sent to countries like the US, China, South Korea and Taiwan for manufacture.

If India can succeed in becoming a hub for manufacturing and designing chips, it will have the added advantage of drastically cutting electronics imports and becoming self-reliant on that front. Because India lacks semiconductor fabrication capacity, our chips and logic memory have to be imported. Here’s an indicator of the demand: India’s semiconductor imports increased 65% in 2021-22 over 2019-20, according to the Commerce and Industry Ministry. According to Vedanta, India’s semiconductor market was worth $27.2 billion in 2021 and will grow to $64 billion by 2026.

If we don’t reduce imports, it would be a drain on our foreign currency reserves and leave us vulnerable to more shocks like the pandemic when the semiconductor shortage disrupted critical businesses, including smartphone manufacturing and automobiles. So, after the pandemic, India earmarked $30 billion to overhaul its technology industry and build local chip supply chains. The India Semiconductor Mission, set up in December 2021, was given Rs 76,000 crore to support companies investing in semiconductors, display manufacturing and design ecosystems.

This is not the first time India has attempted to do something about semiconductor manufacture. In 1984, the government set up the Semiconductor Complex Ltd, a state-owned company to design and manufacture circuits and electronics. However, five years later, a fire destroyed its facilities and its dream to become a global chip manufacturer.

In 2006, it looked as if Hyderabad would become the semiconductor manufacturing capital of India after SemiIndia, an integrated semiconductor firm, announced a $3 billion chip manufacturing facility. However, the plans were shelved due to funding issues.

Nanotech Silicon India, a consortium, also planned to set up a manufacturing unit but backed out after the government’s semiconductor policy failed to satisfy it.

In 2014, India approved proposals from a consortium comprising Jaypee Associates, IBM and Israel’s TowerJazz, and another consortium led by Hindustan Semiconductor Manufacturing Corporation. Again, both fizzled out. The Jaypee consortium faced high debt issues and the other could not submit the requisite documents despite being provided several extensions.

So, what can India can do differently now?

Essentially, what India needs is adequate and patient capital, skilled labour, governmental support and manufacturing technology. Of these, capital is the most significant obstacle.

The right technical collaborations and the ease of doing business will matter too. The industry needs swift approvals, especially environmental clearances. It also needs world-class infrastructure in the form of uninterrupted power and lots of water.

Talent, on the other hand, is abundant. We have great technical universities, such as the Indian Institutes of Technology and the Indian Institute of Science in Bangalore, which churn out quality engineers that are much in demand all over the world.

In addition, the government has sweetened the deal by approving changes in the scheme for the development of a semiconductor and display manufacturing ecosystem. So, following up its December 2021 announcement of $10 billion dollar through the production-linked incentive scheme, India now has fiscal support for a design-linked initiative scheme to drive global and domestic investment in design software, intellectual property rights, etc.

These changes followed months of talks with stakeholders and potential investors so that all areas of chip-making are set up here to create an integrated ecosystem, rather than manufacturing here and finishing elsewhere.

So, other than Vedanta and Taiwanese chipmaker Foxconn, who have signed an MoU to set up a ₹1.54 lakh crore plant in Gujarat, two other projects have been announced. There’s a $3 billion plant in Karnataka to be set up by a joint venture between the Abu Dhabi-based Next Orbit Ventures and Israel’s Tower Semiconductor, and a $3.5 billion plant in Tamil Nadu by Singapore’s IGSS Ventures.

So, what are the challenges?

Chip production is resource-intensive and expensive, as I’ve already described. Also, $10 billion may sound like a lot but it’s not when you consider the industry involved and it’s dwarfed by what other countries are offering. Just the manufacturing setup requires between $3 billion and $7 billion.

Chip-making also requires vast amounts of ultra-pure water, which would be tough for the government to guarantee given the demand from agriculture, other industries and for domestic use. Ditto uninterrupted supply of power, which is absolutely crucial – even a few seconds of fluctuations or spikes could cause millions in losses. These are not easy hurdles to cross.

The government would do well to think through the entire chain before proceeding. Without it, the effort is doomed to fail – just like it did earlier.