Why is justice so elusive for rape victims? 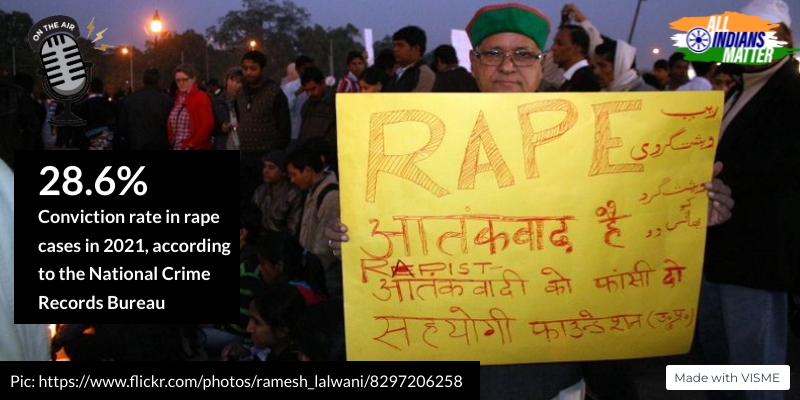 A few days ago, the Supreme Court acquitted three men who were on death row for raping and killing a 19-year-old woman in Delhi in 2012. The autopsy showed severe wounds, suggesting she was assaulted with car tools and earthen pots. The convicts were awarded death in 2014 by the Delhi High Court, with the judge calling them “predators” who roamed the streets “looking for prey”. The victim’s parents were understandably devastated, saying they were “broken” by the acquittal. This is the second time in the past few months that India has set free convicted rapists. On Independence Day, 11 men serving life sentences for the gangrape of Bilkis Bano during the 2002 Gujarat riots and killing members of her family walked free and were felicitated after the Narendra Modi government approved their early release. Now, it’s Bilkis Bano who lives in fear while her rapists are being called “sanskari” by BJP lawmakers. And herein lies the problem – for a rape survivor, the trauma is repeated time and time and time again. Why is it so difficult for rape victims to get justice in India? What’s wrong with our judicial and criminal investigation system? And what’s wrong with us as a society?

First, there is the assault itself. Then comes the trauma of reporting it to apathetic policemen or even openly dismissive ones. Then there’s the long drawn out judicial battle.

For years, the other impediment was the finger test a victim was subjected to — which had the effect of heaping one unimaginable violation on another. Thankfully, the Supreme Court has now outlawed the the invasive “two finger” or “three finger” vaginal test on rape or sexual assault survivors. It’s important to talk about the test because defence teams often used it to say the victim was “habituated to sexual intercourse” – as if that is relevant to the rape. It’s pretty stupid to suggest that a sexually active woman cannot be raped.

India had introduced stringent laws after the Nirbhaya rape of 2012, but they haven’t made things easier for survivors who have to battle stigma and prejudice. It’s no wonder that rapes often go unreported, and the conviction rate is low too – 28.6% in 2021, according to the National Crime Records Bureau, or NCRB. It’s about time governments, medical professionals and the police act with more sensitivity towards, and ensure dignity of, the victims.

Rape is a heinous crime and under Section 376 of the Indian Penal Code, 1960, the punishment is a jail term of not less than seven years, which may extend to life and may also be accompanied by a fine.

Despite the law, the NCRB reported that in 2019 one rape was reported every 16 minutes in India on average. As you can tell, the execution of rape laws needs to be transformed.

In 2019, 4,05,861 cases of rape were registered – a rise of 7.3% over 2018. These numbers don’t include cases that end in murder or attempts to rape. Factor in those that are not reported at all and the number is almost certainly a high multiple of what’s been reported.

And of the cases reported, how many end in conviction? One major problem is that the law requires penetration in order to prove rape. When a rape is reported a while after the crime has been committed, and this is often the case, this evidence is hard to acquire.

Here are a few things courts and governments can do to be more effective and help victims:

I want to end with what the mother of the 19-year-old victim said after the three men convicted of  her rape and killing were acquitted by the Supreme Court recently. She said: “After 11 years, this is the verdict… We have lost… Now, I have no reason to live. I thought my daughter would get justice. We have been cheated and wronged… I was hoping the accused would be hanged. I couldn’t imagine they would roam free one day. My daughter was raped, they poured acid on her and mutilated her. I can’t even describe what happened… I want justice.”

If these words don’t give us pause, if they don’t make us think, then our society is even more messed up than we imagined.