Why the Arab backlash against Prophet comments rattled Modi 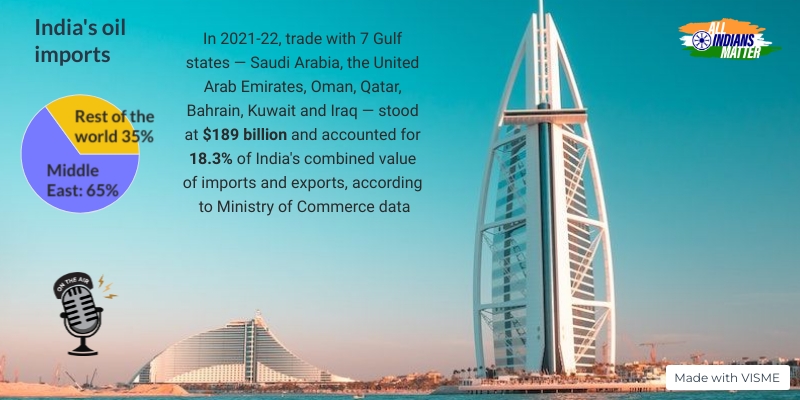 Normally, the Bharatiya Janata Party, or BJP, shows no remorse when its leaders indulge in Islamophobia, minority bashing and hate politics. In fact, a minister even felicitated eight men accused of lynching a Muslim. But it took the government less than a day to discipline two spokespersons after they made derogatory remarks about Islam and Prophet Mohammad recently. The backlash from key Arab trade partners and the boycott of Indian goods in those markets rattled the Narendra Modi government, which scrambled to douse the fire. Nupur Sharma, who passed the shocking comments on the Prophet was suspended, while another spokesperson, Naveen Jindal, was expelled from the party for his comments on Islam. The BJP followed it up with a statement that it reveres all religions and would not stand for any insult to them. Given its actions since it took power and its commitment to Hindutva politics, that statement is laughable and I wouldn’t take it seriously. But here’s what I’ll try to explore today: why is the backlash from Arab nations such a serious matter? What’s riding on our relationship with them?

While the communalisation of Indian politics has picked up pace after 2014, at no time has there been such a strong response from Arab countries. Qatar, Kuwait and Iran summoned India’s ambassadors, while the Gulf Cooperation Council, Saudi Arabia, the United Arab Emirates and the Organization of Islamic Cooperation – a group of 57 Islamic nations – condemned the comments by BJP spokespersons.

Residents of Muslim nations as distant as Algeria called for a boycott of Indian products and the hashtag ‘Anyone but the prophet, oh Modi’ trended on Twitter in the Gulf countries. The United Nations too stepped into the debate with a spokesperson for Secretary-General Antonio Guterres saying: “…we strongly encourage respect and tolerance for all religions.”

Modi, seen as the champion of the Hindu right, has paradoxically tried to balance relations with Muslim countries while propagating his saffron nationalist agenda in India. The effort has been to prevent the domestic agenda from affecting international relations. That hope lies in tatters today and it’s doubtful whether the anti-Muslim rhetoric, which goes unpunished in India, will go unnoticed abroad anymore.

The Islamophobia has economic implications too. As India grapples with a sinking economy, soaring inflation and alarming levels of unemployment, its economic partnerships with the Gulf states are vital. India is the world’s third-largest importer of crude and the Middle East accounts for 65% of its oil imports. There are an estimated 8 million non-resident Indians in the Gulf, who send billions of dollars home. In 2021-22, trade with seven Gulf states — Saudi Arabia, the United Arab Emirates, Oman, Qatar, Bahrain, Kuwait and Iraq — stood at $189 billion and accounted for 18.3% of India’s combined value of imports and exports, according to Ministry of Commerce data.

Let’s take the UAE. In that country alone, 3.5 million Indians reside and account for 33% of remittances to India – that’s more than $20 billion a year. The UAE has identified India as a major economic partner and Minister of Commerce and Industry Piyush Goyal claims it plans to invest $100 billion here. If it materialises, it would mean thousands of jobs that India desperately needs.

In February, India and the UAE signed a free-trade agreement. This means zero-duty access to 97% of Indian products and 90% of products from the UAE over the next 10 years. It was the first such agreement inked by the Modi government.

India’s large expatriate population in Arab nations makes the relationship even more significant – 27.7% of overseas Indians stay in the Gulf Cooperation Council, or GCC, countries. The UAE tops the list, followed by Saudi Arabia with 2.6 million and Kuwait with 1 million, according to Ministry of External Affairs data.

It’s not surprising then that the GCC countries alone accounted for 55.6% of total remittance flow into India in 2017.

These countries are India’s biggest trading partners too: the UAE, Saudi Arabia and Iraq ranked third, fourth and fifth respectively in terms of total trade with India in 2021-22. Our exports to the GCC stood at $43.9 billion.

As of now, the anger against the insulting comments is still simmering. There are calls to boycott Indian goods and freeze the hiring  of Indians, and diplomatic relations have suffered a serious setback. Blame it on the divisive, poisonous politics that the BJP and the Sangh Parivar believe in. A secular country that was firmly set on a progressive economic path has been set back by decades because of the social turmoil unleashed by communalism and its legitimisation. Naturally, this has an impact on other areas such as the economy. Now, it’s come haunt our international standing.

Time will tell how this will play out in the long run but there’s no doubt that India’s image has been badly affected. The responsibility for this lies squarely on the shoulders of the BJP and the Sangh.

How do you think the controversy has affected India? And what do you think will happen next? I’d love to hear from you. Send your comments to editor@allindiansmatter.in.