World’s largest democracy is among the worst for journalists 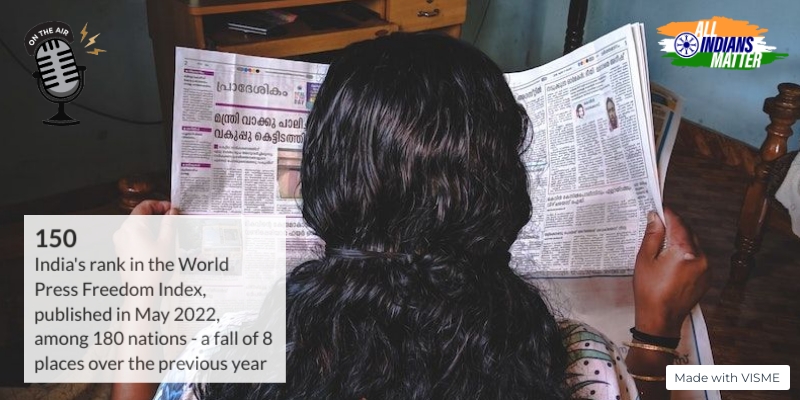 On Independence Day, a little girl stood on her school stage and said: “I am Mehnaz Kappan. Daughter of journalist Siddique Kappan, a citizen who has been forced into a dark room by breaking all of the freedom of a citizen.” She spoke also about our right “to fight back those who ask them to leave”. And she added: “India’s pride, which was reborn, resurrected on 15 August, should not be surrendered before anyone.” Mehnaz’s father, Siddique Kappan, has been in jail since October 2020. His crime: attempting to cover the heinous Hathras gangrape case. It doesn’t help that he’s a Muslim. As he tried to reach Hathras, where a young Dalit woman was gangraped and murdered, Siddique was arrested and charged under the Unlawful Activities (Prevention) Act of 1967. A few days ago, the Lucknow Bench of the Allahabad High Court rejected his bail application. Siddique’s case is emblematic of the assault on journalism in India. Journalists are being targeted for their work and, according to the Committee to Protect Journalists, 2021 was one of the deadliest years of the past decade for Indian journalists, with six killed. It’s no wonder that, earlier this year, India was ranked 150th among 180 countries in the Press Freedom Index published by Reporters Without Borders.

Journalists are being targeted for criticising the government or for covering what is uncomfortable for it. This includes prosecution for sedition, 10 human rights organisations said this year on World Press Freedom Day. The organisations are Committee to Protect Journalists, Freedom House, PEN America, Reporters Without Borders, International Federation of Journalists, CIVICUS, Access Now, International Commission of Jurists, Amnesty International and Human Rights Watch.

They urged the government to respect the right to expression and release journalists held on politically motivated charges. They added that the crackdown on dissent has emboldened Hindutva organisations to threaten, harass and abuse journalists without fear of punishment.

Journalists, meanwhile, also risk prosecution under the Information Technology Act and the IT Rules. These rules allow the government to demand removal of online content without judicial oversight. The Editors Guild of India has said that they undermine media freedom.

Don’t forget the use of Israeli spy software Pegasus that was used to monitor journalists too. More than 40 Indian journalists were on a list of potential targets for surveillance. Predictably, the government responded by stalling attempts to probe these allegations. The groups I mentioned earlier pointed out that this results in a chilling effect on media freedom.

There’s more. Take for instance, the events of April this year. At least five journalists covering an event organised by Hindu nationalist groups in Delhi were attacked. The Delhi police, shockingly, opened a criminal investigation into one of the journalists, Meer Faisal. They accused him of inciting hatred on Twitter, through a post that said participants attacked him and a photographer. Imagine that, investigated for being the victim of assault.

A month earlier, Rana Ayyub, a world renowned Muslim woman journalist and critic of the government, was stopped at the airport from flying to London to address a media event. The reason cited: an ongoing investigation into money laundering and tax evasion, allegations Rana has denied. The action against her attracted the attention of independent United Nations experts who noted that Rana is routinely abused and threatened by government supporters and Hindu nationalist trolls. Many of these threats are serious – that of rape or acid attacks; many have been stalked. Earlier, several Muslim women, among them journalists like Rana, were listed “for sale” on an auction app. Many women journalists have been targeted online and offline by those who identify themselves as government or Bharatiya Janata Party supporters.

Incidentally, the filing of charges against journalists is acute in BJP-ruled Uttar Pradesh. Since Yogi Adityanath became chief minister in 2017, 66 criminal cases have been filed against journalists. Another 48 journalists have faced physical attacks, according to a February 2022 report by the Committee Against Assault on Journalists. The committee said that journalists in small towns and villages are at even higher risk.

In Jammu and Kashmir, the special status of which was revoked in 2019, at least 35 journalists have faced police questioning, raids, assault and restrictions on movement. In some cases, their cellphones have been confiscated. Two years ago, the government gave itself the power to censor news in the region. This is in addition to the use of the Jammu and Kashmir Public Safety Act against journalists, which allows the arbitrary detention of people without evidence or judicial scrutiny. Journalists in Kashmir have struggled anyway because of the frequent internet blackouts – according to one estimate, the internet was shut down at least 85 times in Kashmir last year.

The ground reality is that journalists sympathetic to the Centre get away with broadcasting and publishing shocking content, often demeaning of minorities. It’s a fact of our times that journalists themselves have become polarised, becoming allies of the government rather than those that put it under the microscope. No wonder a report by Freedom House said: “India, the world’s most populous democracy, is also sending signals that holding the government accountable is not part of the press’ responsibility.”

But then freedom of expression has never been a given in India. It’s part of the Constitution but its ambit was reduced by the First Amendment as early as 1951. Since then, it has suffered repeated assaults. And you can’t bank on the courts to do the right thing either. See what happened with Siddique Kappan’s bail pleas.

Harking back to the Emergency imposed in 1975 is this government’s favourite response to anyone who questions it. It was a black period when the media was gagged for close to two years. While there is no formal erosion of our rights or freedom of speech today, the fact is that the media is facing a menacing, snarling state. On paper, our rights are intact but in practice we – and our journalists – are living in an informal imposition of curbs. How do you lift an emergency that was never declared in the first place?